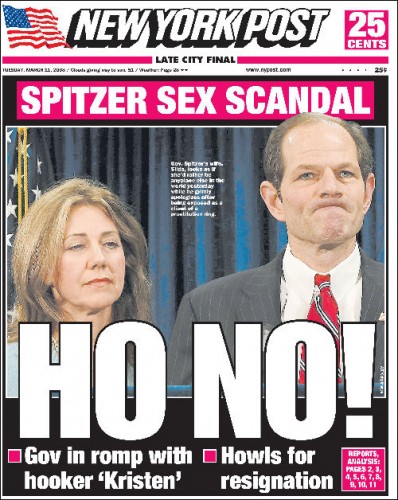 Eliot Spitzer recently spoke with CNN about why he participated in the new documentary, “Client No. 9: The Rise and Fall of Eliot Spitzer” opening Friday in limited release.  The film is directed by Alex Gibney, whose work has included acclaimed documentaries “Enron: The Smartest Guys in the Room”and the anti-war documentary “Taxi to the Dark Side.”

Wall Street never faced a tougher crusader in the twenty-first century than Eliot Spitzer. As New York State Attorney General, he displayed fearlessness at prosecuting esteemed firms such as AIG and Bank of America. After being elected as New York State Governor by a landslide vote, he seemed poised to become America’s first Jewish President. But that trajectory came to an abrupt halt in March 2008 when the FBI prosecuted the Emperors Club escort agency and supplied a detailed description of Client #9, revealed by the press to be Spitzer. The scandal played out for as long as it would sell papers, but some of the most important questions went unanswered. Did politics play a role in the FBI investigation? Was the media misled in its focus? And what the hell was Spitzer thinking?

Renewing their collaboration from Enron: The Smartest Guys in the Room, director Alex Gibney and author Peter Elkind succeed at bringing fresh insight to Spitzer’s story. Combining their research, Gibney focused on the film while Elkind wrote the book Rough Justice: The Rise and Fall of Eliot Spitzer. Other journalists have based the majority of their evidence on the experience of Ashley Dupre, an escort whom Spitzer met with only once. For a more comprehensive perspective, Gibney uncovered the governor’s frequent companion, “Angelina,” and persuaded her to talk for the first time. Gibney’s tenacity also secured an intrepid interview with Spitzer and with several of his harshest political enemies.

Sex is only one layer of this story. The film supplies a valuable examination of the power dynamics between finance and politics. Spitzer is a riveting personality; he displays the qualities that make him both a brilliant lawyer and a flawed human being. When the banking crisis hit in the fall of 2008, just months after his forced resignation, the financial world suffered for want of Spitzer’s watchdog expertise. Spitzer recently ventured back into the public arena and will soon be hosting a new CNN talk show. After this account of his rise and fall, no one should count out his chances to rise again. source: TIFF

Read the interview with CNN