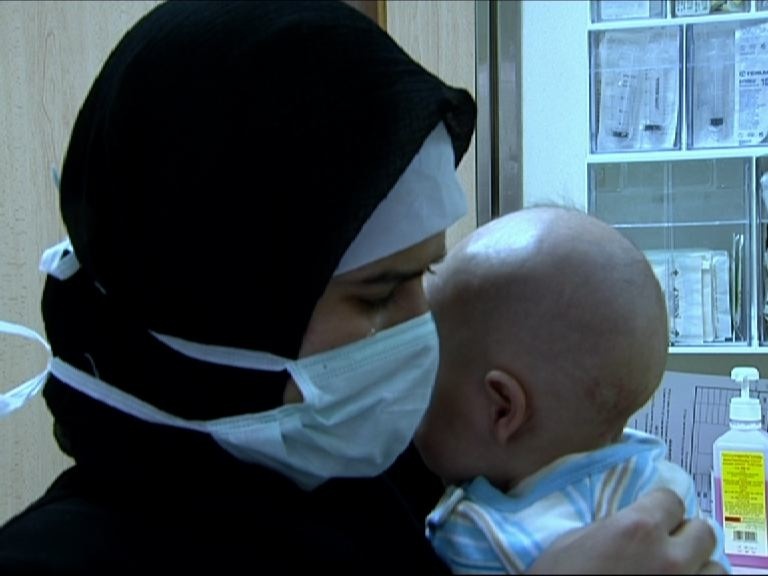 Audience members participating in a panel discussion about Shlomi Eldar’s documentary “Precious Life,” the closing night film of the 25th Annual Israel Film Festival in Los Angeles, received a surprise when the subjects of the film video-conferenced in from Gaza to participate in the talk. Palestinian mother Ra’ida Abu Mustaffa, her husband Faozi and son Muhammad, who is now three, participated in a discussion with Israeli television correspondent Shlomi Eldar, film producer Ehud Bleiberg and moderator Sharon Waxman to talk about their reactions to the film. Ra’ida did note that her son’s health was “not good,” but she had hope for the future.

Born without an immune system, four-month-old Palestinian boy Mohammad Abu Mustafa will die without a bone marrow transplant, a procedure that can only be done in an Israeli hospital. A desperate plea from his doctor to save Mohammad’s life leads Israeli journalist Shlomi Eldar to document this complex and emotional story. As Israeli and Palestinian doctors put aside their differences to protect the child, we are forced to confront the more personal ramifications of the embargo of Gaza.

A powerful appeal for peace, Precious Life explores the challenges and prejudices that must be overcome when officials from conflicting nations attempt to put aside their differences for a noble cause. But even the legitimacy of that cause is called into question due to the complex circumstances at play. Mohammad’s mother, Raida, struggles to address both her desperate desire to protect her son and harsh criticisms from her Gazan community. Her friends and family believe that allowing Jewish doctors, reporters and donors to help her baby marks an affront to their religion. To complicate matters further, Raida fully endorses the use of suicide bombing as a legitimate tool of Palestinian resistance. This forces Eldar — and we as the audience — to grapple with the intricate moral dilemma of saving a child who, later in life, may very well be encouraged to sacrifice his life to kill others.

A film about hope for peace in the Middle East, Precious Life also conveys the universal desire to protect our children and improve their quality of life. Eldar, who witnessed a shocking amount of bloodshed as a war correspondent on the Gaza strip, indicts the region’s violent status quo. While deeply controversial — particularly in Israel, where Precious Life premiered at this year’s Jerusalem Film Festival — the film has won acclaim for its raw depiction of courage and the fight for the safety of a family, regardless of religion and politics.

Winner of 2010 Israeli Film Academy Awards for Best Documentary, “Precious Life” will debut on HBO in 2011.