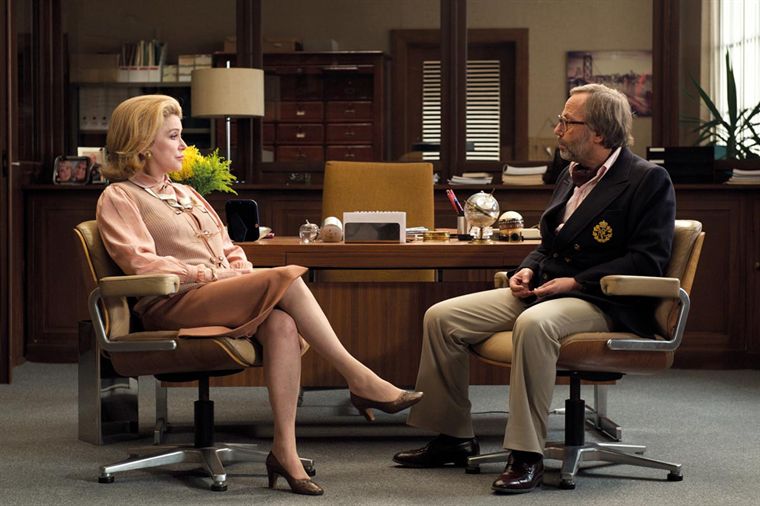 The 34th Portland International Film Festival opens Thursday, February 10, at the Newmark Theater in the Portland Center for the Performing Arts (PCPA) with the French film Potiche from director François Ozon (Under the Sand, Swimming Pool, 8 Women). This light-hearted, sharp-tongued comedy stars two of the most acclaimed and beloved French actors of all time, Catherine Deneuve (The Umbrellas of Cherbourg, Belle de Jour, Indochine) and Gérard Depardieu (The Last Metro, Jean de Florette, Cyrano de Bergerac). The film tells the story of a submissive wife who successfully takes over the running of her husband’s factory when he is forced out by his employees.

François Ozon has a quicksilver touch, shifting easily from stark drama to frothy comedy with each new film. This one looks to be a frothy affair, but there’s a radical streak running through Potiche. With Catherine Deneuve in one of her finest comic roles and Gerard Depardieu as her foil, this is a French farce with a lot on its mind.

1977, in the small town of Sainte-Guenole, Suzanne Pujol (Catherine Deneuve) lives the life of a traditional housewife, doting on her grumpy husband, Robert (Fabrice Luchini), who spends his days running her family’s umbrella business into the ground. To her husband and her two grown children, Madame Pujol is a trophy housewife with no real power; in other words, une potiche.

But when the workers of the umbrella factory go on strike to protest draconian working conditions, all hell breaks loose. Robert suffers a heart attack and is ordered to take time off to recover, and Suzanne is left to run the company with the help of her former beau, the town mayor, Maurice Babin (Gérard Depardieu). At first, she is the laughing stock of all the employees, but when she saves the faltering business and fosters the best working conditions in years, opinions quickly change. In fact, no one wants her husband to take back the reins once he’s recovered. But Mr. Pujol will not go down without a fight; using blackmail and forming secret alliances, he’s determined to win back his role as head of the company and head of his household. However, once this veritable Pandora’s box of deception has been opened, Monsieur Pujol will find out that Madame Pujol has more than one trick up her sleeve. Deneuve is positively luminous as the matriarch learning to flex her muscles, and Depardieu is wonderfully endearing as the passionately Marxist mayor, who still holds a flame for his old petite amie. Delightful, empowering and charming, Potiche is filled with a stylish and charismatic je ne sais quoi. Cameron Bailey | TIFF