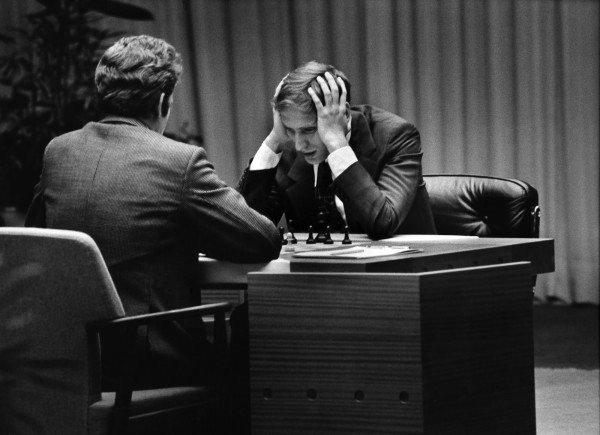 The Full Frame Documentary Film Festival has just announced the 66 selections for the NEW DOCS program.  The program consists of 43 feature films and 23 shorts from all over the world.

At the Edge of Russia  (Koniec Rosji)  (Director: Michal Marczak)
At a desolate military fort in the northern hinterlands of Russia, six soldiers train daily to ward off intruders who will never come. North American Premiere

Being Elmo: A Puppeteer’s  Journey  (Director: Constance Marks)
Meet Kevin Clash, the incredible talent behind one of the most beloved puppets of all time.

Bobby Fischer Against the World  (Director: Liz Garbus)
Revered in his heyday like a rock star, the greatest chess player of all time crashes, a victim of Cold War era psychosis.

The Boy Mir – Ten Years in Afghanistan  (Director: Phil Grabsky)
The mischievous Afghan boy featured in The Boy Who Played on the Buddhas of Bamiyan grows into a still-cheerful young man struggling to make it in a turbulent Afghanistan.

Buriganga  (Director: Michelle Coomber)
An intimate look at life on the Buriganga River in Dhaka, Bangladesh, a waterway teeming with activity and rife with pollution.

Il Capo  (Director: Yuri Ancarani)
This stunning cinematic short follows an Italian machinery conductor as he deftly directs his crew to carve marble out of the mountain.

Convento  (Directors: Jarred Alterman, Evan Meszaros)
This portrait of a magical place explores nature, art, and spirit through a family’s relationship with an ancient monastery and the land.

Diary  (Director: Tim Hetherington)
A subjective, haunting, yet beautiful evocation of the experience of being a war reporter, from Restrepo co-director Tim Hetherington.

An Encounter with Simone Weil  (Director: Julia Haslett)
A filmmaker turns to the French philosopher as she grapples with how to respond to all the human suffering around her.

Everybody’s Nuts  (Director: Fabian Vasquez Euresti)
A collage of images unfolds, telling the story of a family, all sick from contamination by the same oil company that employs the father.

The Grove: A Fight to Remember  (Director: Andy Abrahams Wilson)
Public policy and personal memories collide in San Francisco in the attempt to memorialize the tragedy of AIDS on a national scale. World Premiere

The Hangman (Hatalyan)  (Director: Netalie Braun)
In 1962, Shalom Nagar was the guard responsible for executing Adolf Eichmann. Today he meditates on the past as he fulfills his duties as a ritual slaughterer. North American Premiere

The Harvest  (La Cosecha)  (Director: U. Roberto Romano)
The lives of three juvenile migrant workers are marked by the demands of their families on the road and their own responsibilities in the fields. US Premiere

Hell and Back Again  (Director: Danfung Dennis)
From the turmoil of war in Afghanistan to the anguish of recovery back home, this film captures what war feels like to a Marine.

How to Die in Oregon  (Director: Peter D. Richardson)
A profound and strangely reassuring film about people in Oregon who end their own lives under the state’s Death with Dignity Act.

How to Pick Berries  (Miten marjoja poimitaan)  (Director: Elina Talvensaari)
In a misty Finnish dreamscape, locals stew over the mechanized monsters and Thai immigrants who pilfer their revered cloudberries.

If a Tree Falls: A Story of the Earth Liberation Front  (Director: Marshall Curry)
An environmental activist driven to increasingly extreme methods of protest faces profound political consequences in the wake of 9/11.

Killing in the Name  (Director: Jed Rothstein)
After a suicide bomber attacks his wedding in Jordan, Ashraf Al-Khaled courageously condemns jihadist terrorism around the world.

Kudzu Vine   (Director: Josh Gibson)
This ode to the vine evokes mythic textures of the South through images of kudzu-covered forms radiating with the luminance of early cinema.  World Premiere

The Last Mountain  (Director: Bill Haney)
The fight for Coal River Mountain heats up as residents face off with Massey Energy over the controversial effects of mountaintop removal mining.

A Matter of Taste: Serving up Paul Liebrandt  (Director: Sally Rowe)
After several failed ventures, the youngest chef ever to earn three stars from the New York Times tries to re-establish himself in the competitive world of fine dining.

Minka  (Director: Davina Pardo)
A 250-year-old farmhouse is the repository of cherished memories for a renowned foreign correspondent and his adopted Japanese architect son.

The New Saint  (Director: Allard Detiger)
Can the Russian Orthodox Church be persuaded to canonize a young martyred border guard who has become an icon throughout the land? North American Premiere

(No) Laughing Matter  (Director: Vanessa Rousselot)
The filmmaker’s search for jokes told by Palestinians yields both cultural insights and pointed commentary behind the humor. US Premiere

One Night in Kernersville  (Director: Rodrigo Dorfman)
Jazz bassist John Brown and his big band do justice to the swing tradition in this well-paced recording session doc. World Premiere

Pandore  (Director: Virgil Vernier)
The mercurial doorman at a Parisian nightclub exercises his arbitrary authority over who is allowed to enter and who is not. US Premiere

Pig Country  (Director: Andreas Koefoed)
A third-generation swine farmer in Denmark could lose his family’s pastoral way of life when property payments cannot be made.

Pit No. 8  (Auk nr 8)  (Director: Marianna Kaat)
Yura and his sisters escaped their alcoholic parents, but to pay the bills he must mine for coal in abandoned pits near his Ukrainian hometown. North American Premiere

Planet Kirsan  (Planeta Kirsan)  (Director: Magdalena Pięta)
For President Kirsan Ilyumzhinov of Kalmykia the noble and ancient game of chess is the linchpin of his nation’s political ambitions. World Premiere

Position Among the Stars  (Stand van de sterren)  (Director: Leonard Retel Helmrich)
This third installment of a trilogy follows an Indonesian family distinguished by the mother and grown son’s devotion to different religions, Christianity and Islam.

Pruitt-Igoe Myth: An Urban History  (Director: Chad Freidrichs)
A compelling search for the full story behind the huge and doomed public housing project in St. Louis, that iconoclastic “failure” of modernism.

Raising Renee  (Directors: Jeanne Jordan, Steven Ascher)
Artist Beverly McIver was enjoying a skyrocketing career when a casual—yet life-changing—promise made to her mother years before came due. US Premiere

Ray’s Birds  (Director: Deborah Stratman)
Deborah Stratman (O’er the Land) returns with this kaleidoscopic look at an English aviary and its marvelous and mysterious flock.

Scenes of a Crime  (Directors: Grover Babcock, Blue Hadaegh)
A murder mystery based on a controversial videotaped confession of a New York man who still claims he is innocent of killing his child. World Premiere

Skateistan: To Live and Skate Kabul  (Director: Orlando von Einsiedel)
Skateboarding comes to Kabul, Afghanistan, offering a group of kids an escape from the desolation and violence in their war-torn country.

Steps to Eternity  (Pasos a la Eternidad)  (Director: Daniel Goldberg)
In this enthralling film, which consists of one 27-minute-long take, a routine morning walk becomes a journey of transcendence. US Premiere

Still Here  (Director: Alex Camilleri)
Reflections of a man with genetic immunity from AIDS, and the impact of watching his longtime partner die from the same disease.

Take Me Away Fast  (Director: Leigh Iacobucci)
A German DJ searches for rare funk records in West Africa in this complex film about fandom, collecting, and cultural appropriation. World Premiere

The Team  (Director: Patrick Reed)
Can a TV soap opera about a soccer team bring unity to Kenya, still reeling from the tribal strife touched off by the 2007 elections? North American Premiere

Test Site  (Director: Jesper Wachtmeister)
A series of vignettes shows how people live in the desert wildernesses of the American West, and the effect it has on their minds. World Premiere

Tugs  (Director: Jessica Edwards)
This lush character-driven short takes us for an enjoyable cruise on the hardest-working little boats in New York Harbor.

The Universal Language  (Director: Sam Green)
The story of Esperanto, the language that attempts to span all boundaries, through archival footage and contemporary interviews with those who practice its art. World Premiere

Vera  (Director: Francesca Melandri)
On the day a foal is born, a thoroughbred horse breeder outside Rome remembers her refugee past. North American Premiere

We Still Live Here  (Âs Nutayuneân)  (Director: Anne  Makepeace)
The Wampanoag Indians embark on a quest to reclaim the forgotten language of their people.

Where Soldiers Come From  (Director: Heather Courtney)
Childhood friends enlist in the army, are deployed to Afghanistan, and return home; but war has changed both them and their loved ones.

Windfall  (Director: Laura Israel)
Once a peaceful community, the rural town of Meredith, N.Y., is now torn apart by the recent development of industrial wind turbines.