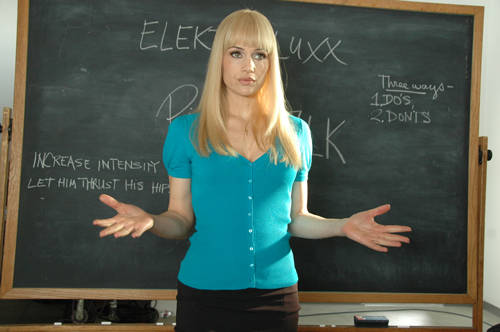 Elektra Luxx is Sebastian Guiterrez’s sequel to a previous film, Women In Trouble. Picking up a month after the events of the first film, the plot centers on the porn star Elektra, played by Carla Gugino, and her struggle to change her lifestyle after discovering she is pregnant.  One act of good will Elektra provides for society is teaching a sexual education class for women.  A flight attendant Cora, played by Marley Shelton, confronts Elektra after class with lyrics written about Elektra from deceased rock star husband Nick Chapel.  In exchange for these lyrics, Cora requests that Elektra seduce her fiancée.  While catching them in the act, Cora hopes to feel less guilty about having cheated on her own fiancée.  Elektra agrees to play Devil’s advocate, which, after discovering she is pregnant, sends her into a crisis that demands the Mother Mary herself interject.  The story branches out to introduce Adrianne Palicki’s (Friday Night Lights) character, a porn star acquainted to Elektra. Her personality leaves you wanting to strangle or dash while her charms and bluntness leave the characters who encounter her shocked yet complacent, if not confused.  Though these women make the same type of films, they could not be more diverse, and depart on their separate journeys.

Opening with a satirical monologue from the well-known Joseph Gordon Levitt, we are meant to feel that this film is setting us up for some quick laughs, a witty satire on the porn industry and the exploitation of the women worshiped in this niche.  Joseph Gordon Levitt is our story teller in the film and an avid worshiper of Elektra.  As the messy narrative unfolds, the movie takes a serious spin from satire to a meaningful examination of our female characters.  It will make you laugh at times, smile throughout, and leave you affected, though not everlastingly, with the sincere themes of human depression, self examination and fear.  What happens in the bedroom is only the backdrop.  While light-hearted female empowerment is an underlying theme, there is enough sex, fun and comedy to keep the most serious parts of the film soft and disarming.

The narrative itself is a bit choppy and random.  The dialogue in a few scenes, particularly with the men, feels contrived and a bit obnoxious.  Our male characters appear as secondary characters to build character depth and conflict in our female characters. The story picks up quickly when we are finally given enough to sink our teeth into.  I still can not discover a good reason for the inclusion of some scenes in this film unless they were intended solely for comic relief, and were rather mediocre to that effect.  Kathleen Quinlan’s character Rebecca plays an older and wiser, single and attractive bestselling author who tracks down Elektra and confesses how she has helped Rebecca with her own sex life.  The performance given by Quinlan comes at a crucial time in the film where the story begins to plateau and become directionless.

The acting by the female leads drove this movie home.  The dialogue is witty, usually meaningful and only rarely, and never too distractingly, a bit monotonous. The diverse stories and personalities going on between the women, with men intertwined, keeps you on your toes and in search for how they connect. This movie has some great messages and leaves you thinking about what is important in life regardless of gender.  The insecurities of both men and women, and the quality of our character, are held in the spotlight under scrutiny.  It appeals to the heart of a woman, places no blame on men, and tries to unite all viewers open enough to hear the good-natured message that it is never a bad time to be honest, question who we are and find the courage to change the way we think of ourselves.  It is no wonder the writer/director Sebastian Guiterrez feels he is on to something and will soon release a third installment, tentatively entitled Women in Ecstasy, to continue the trilogy.