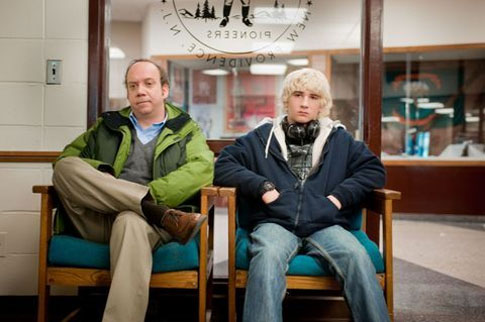 Much of the success Thomas McCarthy’s delightful and thoughtful new comedy Win Win has to be rightfully attributed to its very young and until now completely unknown young star, the seventeen-year old Alex Shaffer, who two weeks after being cast in the movie (about a near broke elder care lawyer who moonlights as a high school on the side) won the regional state wrestling championship in his home state of New Jersey, where the film also takes place.

His wryly poised, perfectly timed and slyly hilarious performance seems to come to him completely naturally- Shaffer had last acted in an six grade production of “The Pirates of Penzance.” It is truly almost a Spicoli-like, Sean Penn turn- as in, “Where did this kid come from?” Along with the truly, sweetly brilliant cast, Shaffer very nearly walks away with the film.

“I would say acting in general was the hardest part for me. I mean, I didn’t know how to do it. I was kind of just pretending to be someone else. That’s really what acting is. But I was taking it very simply; I was acting in a very simple way. But just working with Paul and Amy, and all of them really got me into it.”

Shaffer has been practicing wrestling since age five, taught by his father, whom himself wrestled in high school. “I tried to act in 8th grade, but I didn’t get any roles in the play,” Shaffer told PopcornBiz. “I don’t know what happened—I never really got along with that teacher so well anyway. I don’t know, I really like acting, now at least.”

He now plans on moving to LA. Looks like he won’t have to worry all too much about snagging roles now. This kid is seems to be ready for the big time, big-time.