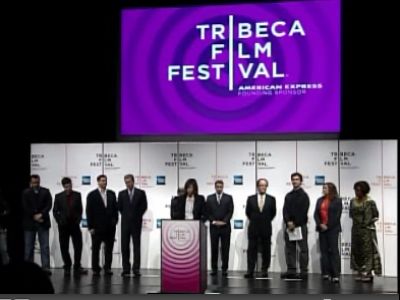 The Tribeca Film Festival (TFF), announced its jurors – a diverse and talented group of 38 individuals, including award-winning filmmakers and screenwriters, celebrated actors, respected journalists and media pioneers. They will be divided among the six competitive Festival categories and will announce the winning films, filmmakers and actors in those categories at the TFF Awards Night ceremony on April 28 hosted by Gideon Yago, which will be streamed live on TribecaFilm.com. The 2011 Festival runs from April 20 – May 1.

Following is a list of all 2011 Festival jurors and their respective categories.

The jurors for the 2011 World Narrative Competition are:

Rula Jebreal: Journalist, author, screenwriter and actress:  books include The Bride From Assuan, Rejected and Miral, which was adapted into a film of the same name.

Art Linson: Gotham award winning producer; films include Singles, Fight Club, Lords of Dogtown, Into the Wild, What Just Happened and The Runaways.

The jurors for the 2011 World Documentary Competition are:

Amir Bar-Lev: Documentary filmmaker and producer; films include Fighter, My Kid Could Paint That, The Tillman Story and the upcoming Garcia.

Abigail Disney: Film producer and philanthropist; films include 2008 TFF Best Documentary Winner, Pray the Devil Back to Hell, Children of Invention, Sons of Perdition and the upcoming narrative feature Return.

Whoopi Goldberg: Moderator on television’s The View, and actress, comedian, humanitarian with Oscar, Golden Globe, Emmy, Tony and Grammy wins. Recent films include Toy Story 3, For Colored Girls and the upcoming A Little Bit of Heaven.

Louie Psihoyos: Oscar and DGA winning director; films include The Cove and the upcoming The Singing Planet.

The jurors for the 2011 Emerging Narrative Competition are:

Paul Dano: Independent Spirit and SAG award nominated actor; films include L.I.E., Little Miss Sunshine, There Will Be Blood, the recently released Meek’s Cutoff and the upcoming Another Bulls–t Night in Suck City.

Zoe Kazan: TFF 2009 Best Actress winner for The Exploding Girl; other films include Me and Orson Welles, The Private Lives of Pippa Lee, It’s Complicated and the recently released films Happythankyoumoreplease, and Meek’s Cutoff.

Anna Kendrick: Oscar, BAFTA, Golden Globe , SAG, Independent Spirit and Tony award nominated actress; films include Rocket Science, the Twilight series, Up in the Air, Scott Pilgrim vs. the World, and the upcoming Live With It.

Rainn Wilson: Emmy and SAG Award nominee for television’s The Office; films include Juno, The Rocker, Hesher and the just completed Few Options.

The jurors for the 2011 Emerging Documentary Competition are:

Jared Cohen: Director of Google Ideas, Adjunct Fellow at the Council for Foreign Relations and Author of One Hundred Days of Silence: America and the Rwanda Genocide, and Children of Jihad: A Young American’s Travels Among the Youth of the Middle East

J.D. Heyman: Executive Editor of People and former editor at Us Weekly. Held editorial positions at Cosmopolitan and the New York Daily News. Author of books include Get a Life: A Guide to Jobs, Money and the Real World, and The Singled Out Guide to Dating.

Annie Sundberg: IFC and Sundance award nominated director; films include The Trials of Darryl Hunt, The Devil Came on Horseback and Joan Rivers: A Piece of Work.

The jurors for the 2011 Narrative Short Film Competition are:

Ceci Kurzman: Founder of Nexus Management Group, whose clients include Shakira, and consultant for the Global Philanthropy Group.

Paul Schneider: Actor and screenwriter; films include All the Real Girls, The Family Stone, Lars & the Real Girl, Bright Star, Away We Go & the upcoming Water for Elephants.

The jurors for the 2011 Documentary and Student Short Film Competitions are:

Ahmed Ahmed: Comedian and director; noted for his directorial debut Just Like Us, an official selection of the 2010 Tribeca and Doha Tribeca film festivals. Other films include the UAE film City of Life and Iron Man.

Zoe Kravitz: Actress; film roles include The Brave One, Birds of America, The Greatest and the upcoming Beware the Gonzo (a 2010 TFF selection and upcoming release by Tribeca Film), Yelling to the Sky and X:Men: First Class.

Together, the six TFF juries will award $175,000 in cash and prizes.  Festival winners will also receive a piece of original art by an acclaimed artist as part of the Tribeca Film Festival Artists Awards program.