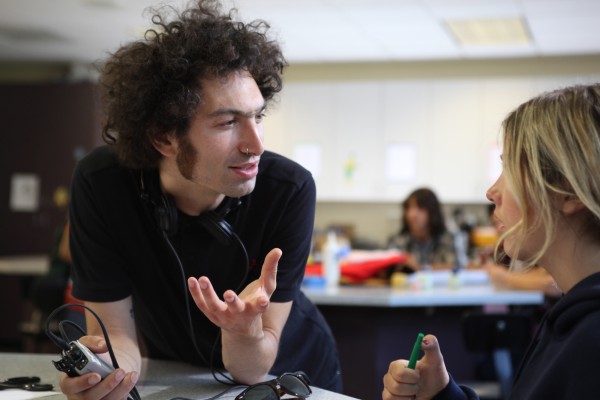 Hello! Azazel, you’re in town (in NYC) for the BAM Festival?Yeah! It feels really nice. It’s the best way to kind of kind of home. You know, I live in Los Angeles now- so, to come home to New York, where my folks and friends are, where I was raised, and to have a film that’s being well received, it’s been really important to me. And it’s summer here!

Everyone is so curious about how you cast Jacob Wysocki (who plays Terri in the film), and how you found him. Was that pretty instantaneous?

No. We were lucky enough to be able to hire Nicole Arbusto and Joy Dickson before we had any real money for the film. We knew it was going to be a really long search to find the right Terri. So, one of the very things we did was hire the casting directors to start them on our search. I saw SO many talented kids, really, some very, very strong possibilities- for different Terris, different Chads, different Heathers (all lead characters in “Terri.”) But Jacob just brought in a kind of confidence that I thought would be very hard for a director to manifest. I kept calling him back in to read with this Heather, or that Chad, and it became really clear that he was the one.

He is pretty amazing in the film. Sort of a star turn, similar in a way to what “Rushmore” did for Jason Schwartzman.

And can you imagine going up against John (John C. Reilly, star of “Terri”) in your first film? I mean, John was the most experienced person on the set, you know- crew included! And then here’s this kid on his first movie, on his day- sitting in a room with John. And I’m watching him, and watching them push each other, in different ways…

Was Jacob a child actor?

No! He was a side character in the TV series “Huge,” and this was actually I think his very first audition for a film.

You originally planned to co-write this with the screenwriter Patrick DeWitt, who is also novelist?

I planned on co-writing it, but I ended up writing up so much less, I took my name off the credit. He came to me with these pages about a long, eternal monologue of this kid who wears pajamas, and comes to school every day in his pajamas-all these different issues. So, the idea was that we’d turn it, together, into a screenplay. So, he’d send me the first few pages every other day or so, and I was adding series of commas! I was doing nothing! So, I just let him go, and he came up with the script. It was great. (Patrick’s novels include “Ablutions” and “The Brothers Sisters.”)

Tell us about Creed Bratton, who plays Uncle James in “Terri.”

Total surprise! He was somebody that I was just so excited to meet, and to just be able to audition! When I saw he was coming in to read for Uncle James, you know, I’m a huge fan of “The Office,” so I was so thrilled. But I didn’t think he’d be our Uncle James right away. But he transformed himself during that audition. This was one of the best auditions I’ve ever seen. It became really clear.

Azazel, you have quite an interesting background. I know that your father is a pretty famous experimental filmmaker…

Was he a pretty profound influence on you growing up, as far as your artistic choices and leanings?

Yeah, I grew up extremely, extremely wealthy- obviously not money-wise, but just in terms of what my parents have offered me. In terms of telling me that what I thought about things was important, that what you make is important, and it can be. That art itself can be very important.

I know. It is lucky. It’s a good weight to have. It doesn’t allow me to come up with easy excuses to doing things I don’t believe in, you know? I mean, I’ve obviously had to make a living, and sometimes work on things that I don’t care for as much as my own stuff. But when it comes to my own work, it’s a nice pressure to have.

That’s fantastic. As a little aside, I read that you were obsessed of Joe Strummer of the Clash?

I was, and I am! If there’s any way I can steer this conversation to talking about Strummer, I’m all for it.

Okay, I have an idea. The film is about, in a way, bullying in different forms. I heard you were a bit of a “punk rock bully” in high school. Is that true?

(Laughs.) You know, well, I was one of those bullies that would hide behind other people, not start trouble or anything. But that really was my way into Terri. Because I know if Terri had gone to my school, I would have been one of those kids who would have just kind of seen him as something to make fun of. It sucks. I was a fucking idiot! But I feel for them (the bullies) as well. During those trying teenage years, you can’t control what’s going on, both internally or externally. It’s not an excuse, but it’s a reality.

The one scene with Heather and Chad near the end is incredible. It reminds me of something strange that may actually happen to someone in high school, rather than what we normally see on film. Did that come from any direct experience?

Absolutely! I mean, I felt like if there was anything that I could offer in making a coming-of-age movie, it would be a different depiction than what I’ve seen of those long, (high school era) nights depicted on film. I knew the movie as a whole, but I also know that when we get to that scene- that scene is something different. I thought, if everything that preceded it led me to this place (in the film), than there’s something really valuable here going on here.

That’s also quite a delicate scene. How was that handled?

Yeah, I was scared sick about that scene! Because it’s one of those scenes that you do not want to mess up. It’s so impossible to get the most skilled actors to depict being under the influence in any kind of honest way. And then to have these kids, who have all different varying degrees of experience. Bridger Zadina (who plays Chad in “Terri”) had to Google “being drunk” to even play it! He’d never drunk anything before! They were definitely all really stretching- these characters weren’t them at all. But we saved that scene for last. And it kind of gave us the ability to have built up a trust between all of us- with me as director, and each other as actors to director. The producers really gave us enough time. They gave us enough time to go into that shed, and to not emerge until we had that scene.

Thanks! Wait, did we figure out to get the Clash in?

I’ll tell you this. I went to see him (Joe Strummer of the Clash) when I was nine. I slept overnight to see them in ’82. And it comes in waves (the obsession) . Now that the film is being released, and I need all the strength, and all the courage cause I went this film to go out and do well…. I’ve just been listening non, non-stop to the Clash! It’s been a great comfort.

You can rest pretty easy, I think! Thank you so much, Azazel. it was a real pleasure.