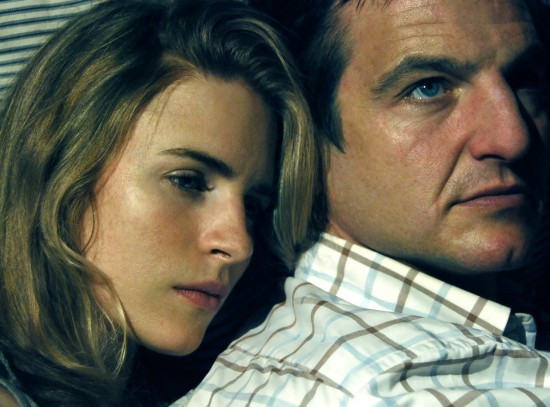 Actress-producer-co-writer of “Another Earth” Brit Marling lights up the screen in this truly wonderful, low-key “sci-fi romance,” which she co-wrote with director Mike Cahill. The film was one of the toasts of Sundance, and is an extremely low-budget mediation on destiny and the concept of “what if there were another YOU out there?”

Marling plays Rhoda Williams, a bright, pretty seventeen-year old about to graduate high school, happily celebrating her acceptance into MIT’s astrophysics program. Driving home tipsy from the party, she learns via radio broadcast that “another earth” has just been discovered, an exact replica of our planet called “Earth 2.” As Rhoda looks up to dreamily gaze at the wondrous new planet, her world literally collides with a famous composer (William Mapother) and his family.

Directed by Mike Cahill, this film, shot on such a small budget they actually had to steal one of the locations outside of a jail, is pretty remarkable in its originality and absolute clarity of vision. Marling is also tough and luminous, and William Mapother has that crinkly-eyed charm reminiscent of Dermot Mulroney (whom he resembles.) What Cahill manages to do with very limited (and inexpensive) visual effects, pitch perfect control on the film’s tone, and the actor’s performances is pretty extraordinary. He is certainly a director to watch. Vimooz recommends that you check out this film, which opened June 22nd. We loved it, and so will you…!