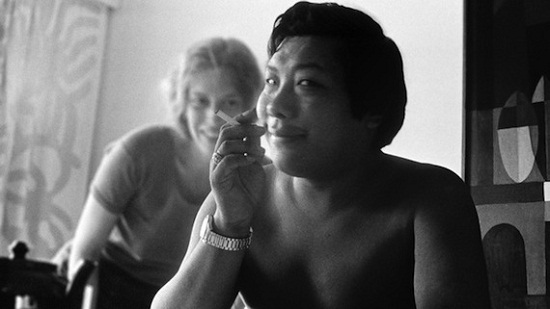 Crazy Wisdom, a documentary by Johanna Demetrakas will open at the Rubin Museum in New York on Friday, November 25 (for a full week run), and at a Laemmle theater in Los Angeles on Friday, December 2.

Crazy Wisdom Productions is proud to announce the US Theatrical release of CRAZY WISDOM, a documentary by Johanna Demetrakas.  After sell out screenings at the Maui, Santa Barbara and Boulder film festivals, the film will open at the Rubin Museum in New York on Friday, November 25 (for a full week run), and at a Laemmle theater in Los Angeles on Friday, December 2.  Other cities will follow.

We speak casually of good parking karma, Samsara is a perfume, and Nirvana is a rock band.  A recent survey by Germany’s Der Spiegel revealed that Germans like the Dalai Lama more than their native-born Pope Benedict XVI.  Tibetan Buddhism is doubling its numbers faster than any other religion in Australia and the U.S.A.  How did it happen? CRAZY WISDOM explores this profound cultural shift through the story of Chogyam Trungpa, the brilliant “bad boy of Buddhism.” Born in Tibet, trained in their rigorous monastic tradition, Trungpa fled the Communist invasion in 1959. In Britain, seeing the cultural gap blocked his students from any deep understanding of Buddhism, he renounced his vows, eloped with a sixteen year-old, and lived as a westerner.  In the U.S., he openly drank alcohol and had intimate relations with students.

Was this the “crazy wisdom” that his Tibetan colleagues recognized as an authentic way to manifest in the world?  And was it “crazy wisdom” that helped him build the first Buddhist university in the western hemisphere and articulate the Buddhist path in a way that would sweep across the country in one short decade?

Trungpa landed in the U.S. in 1970 and legend has it that he said to his students: “Take me to your poets.”  He drew a following of the country’s prominent spiritual teachers and intellectuals – including R.D. Laing, John Cage, Ram Dass, and Pema Chodron.  Poet Allen Ginsberg considered Trungpa his guru; Catholic priest Thomas Merton wanted to write a book with him; music icon Joni Mitchell wrote a song about him.  Trungpa became renowned for translating ancient Buddhist concepts into language and ideas that Westerners could understand.  Humor was always a part of his teaching – “Enlightenment is better than Disneyland,” he quipped, and he warned of the dangers of the “Western spiritual supermarket.”

Initially judged harshly by the Tibetan establishment, Trungpa’s teachings are now recognized by both western and eastern philosophers and spiritual leaders, including the Dalai Lama, as authentic and profound. Today, twenty years after his death, Trungpa’s books have been translated into thirty-one languages and sell worldwide in the millions.  His organization thrives in thirty countries and five continents.  Yet Trungpa’s name still evokes admiration and outrage.  What made him tick, and just what is crazy wisdom anyway?