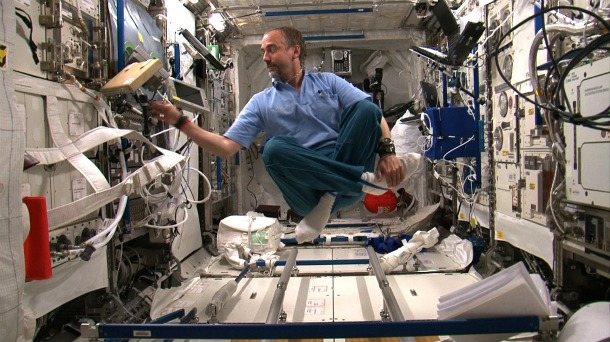 The award-winning documentary Man on a Mission: Richard Garriott’s Road to the Stars, a riveting account of Richard Garriott’s lifelong quest to become the first son of an astronaut to blast into space opens January 13, 2012, in theaters and VOD platforms nationwide. Man on a Mission is directed by Mike Woolf, produced by Brady Dial and released by First Run Features.

Best known as the father of early computer games like Ultima and Ultima Online, Richard Garriott always wanted to follow in his astronaut father’s footsteps. But when eye problems made a career at NASA impossible, he turned to private space travel to make his dream come true. Man On A Mission captures everything from Garriott’s training in Russia to his launch aboard the Russian Soyuz spacecraft, as well as life aboard the International Space Station, resplendent views of the earth from space, and a never-before-seen view from inside the capsule during the fiery re-entry to Earth.

Already a legend in the PC gaming world, Richard Garriott is known to millions of followers as “Lord British.” His Ultima series was one of the first fantasy game sensations and he became a godfather of today’s massive multiplayer industry with Ultima Online. But most people don’t know that his father, Owen Garriott, flew NASA missions on Skylab in the early 70’s and the Space Shuttle in 1983 – and that Richard always hoped to follow his father into space.

The trouble is, in order go into orbit from the U.S., you have to be a NASA astronaut. Being nearsighted, Richard knew at an early age that NASA was never option. But that didn’t stop him from dreaming. As he earned a fortune in the video game industry he worked tirelessly at making his dream a reality by investing in private space travel.

The only way for a private citizen to get to space is onboard a Soyuz rocket through the Russian space program – for a hefty $30 million. But the commitment is more than financial; the rigorous training takes upwards of a year and in Richard’s case, demanded extra physical sacrifice.

In riveting detail, Man on a Mission tracks Richard’s training, beginning at Star City, the mysterious headquarters for Russia’s space agency. As he learns about their previously secret history, Richard serves as a guide to the inner workings of Moscow’s mission control. He also works with NASA, and his father, to create a series of experiments aboard the space station. Richard doesn’t forget to pack his HD movie camera, and creates a dreamlike cache of home movie images from space.

The excitement is palpable as the countdown enters its final days, hours, and then minutes, until finally it’s time for lift off.