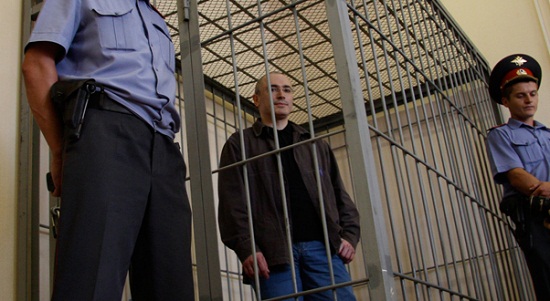 Cyril Tuschi’s riveting new documentary “Khodorkovsky” focuses on the 2003 imprisonment of Russian oligarch, the billionaire, Mikhail Khodorkovsky, who at the time of his arrest at forty-two years old was the richest man in Russia.

Brought to “court” on charges clearly trumped up and false (tax embezzlement and fraud), in a case that had the world watching and the proceedings of which even had then President George Bush deem wrongful and misguided, Khodorkovsky remains in prison in Siberia to this day. This documentary is the story rife with the country’s entire key political, economic and industry players, and it is a dense, richly woven web of intrigue, politics and clashing male egos.

Mikhail Khodorkovsky was a rather mild-mannered science and engineering student with an “aura” about him, as fellow students and friends describe him. An avowed socialist, his attentions and ambition soon turn to capitalism when the Cold War began to melt down the country’s communist infra-structure, the U.S.S.R. was becoming Russia again, and soon became very interested in acting and behaving like a proper Western democracy.

As Russian state assets were sold off, the then government, trying to keep the land, assets and industry primarily “Russian,” were forced to sell to the lowest Russian bidder, as funds were simply not accessible, impossible to find on any sort of reasonable scale, inside of mother Russia itself. Khodorkovsky and his friends had cleverly started a bank during this time. In 1995, they acquired the main Russian oil company, later to become Yukos, for the paltry sum of $330 million. The government, again, felt obliged to sell, at an auction, it was noted later, which had very little competition. With part of their original company’s manifesto stating, “Let capitalism be our compass,” Khodorkovsky and his team soon became major global players- meeting with heads of state, zipping around in private jets, and Khodorkovsky himself consulting the Russian government itself about how to form its newly democratic judicial system.

The documentary is really quite fascinating, as it is at once dissecting a current event in Russia’s ever-changing economic-political history, and how it will establish itself in the global economy, as well as examining the will that comes to blows of two very different types of men: Russian Prime Minister Vladimir Putin and Mikhail Khodorkovsky himself.

When the government learns that Yukos may soon be going partially public, could be bought and owned by outside investors, (read- the US! Exxon! Mobile!) Putin and his cabinet are clearly hysterically nervous about this: What would a westernized Russia look like? What would it mean? Most importantly, would they have the same control? As we stare at Putin’s face in the footage and photos, we wonder: Does he care about saving Russia, or simply his place in the world, his career, and place in society?

It is due to Tuschi’s film, which is five years in the making, that we get the complete picture. As his interviews with young, hip Russians illustrate, the party line in Russia is still that Khodorkovsky stole from his own government, and is, basically, a pretty evil guy. But as Putin’s actions escalate, we can see it truly is not Russia or her people he is worried about. He is pissed off, and it we see it devolving into a strange, globally witnessed “mano-a-mano” confrontation.

Tuschi actually became pen-pals of sorts with Khodorkovsky, and in voice-over the audience learns what a thoughtful, ambitious, and critical thinker Khodorkovsky is. He also seems steadfast in his views today, and Tuschi even gets the chance to interview him after he stand son trial for another bogus charge of stealing “350 million barrels of oil” from his own company. “You would have to circle the earth three times with a freight train to transport that much oil. Where would we have hidden it?” Khodorkovsky says, exasperated and almost cheerfully. “These charges are absurd.”

Weaving these moments in with a stark, black and white animation to highlight specific flash-backs, it is absolutely fascinating to ponder his refusal to leave Russia as a genius mastermind chess move by Khodorkovsky. He has the will to not have only become the richest man in the world under forty at one time, certainly. But-by showing Russia itself and the rest of the world how corrupt their current Russian government really is, could he really get out of jail and end up running the country? We see a capitalist who is now a major human rights case, a man who is at first incensed by Putin’s smallness. Then, like the entrepreneur that he surely is, the viewer could also surmise that this man with the iron will to succeed could very well turn his catastrophe into a truly grand political opportunity.

“It is difficult for a small-minded man to get over a slight.” to paraphrase Khodorkovsky in writing to Tuschi about Putin. This is a truly a wonderful documentary- expansive, glowing, exhausting, heart-rending and informative- and, like an animated political discussion in an your favorite coffee shop with new friends- it completely stays with you. Playing at the Film Forum in NYC until December 13th.