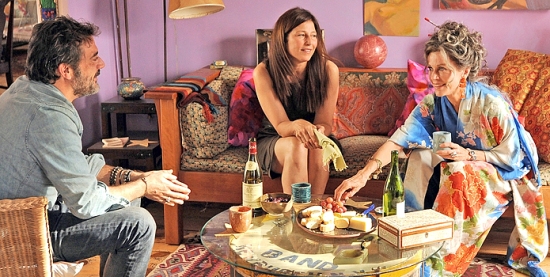 Fonda makes her return to the screen working with Australian film veteran Beresford (Driving Miss Daisy, Tender Mercies, Mao’s Last Dancer). Together with a wonderful cast, they deliver a heartfelt and funny comedy about reunion and second chances. Diane is a conservative lawyer (Keener) who, after splitting with her husband, takes her two teenage children, Zoe (Olsen) and Jake (Wolff) to meet their estranged, eccentric grandmother Grace (Fonda), the epitome of the term “free spirit” who lives in Woodstock, NY. Her personality was always so immense Diane felt there was rarely any room for anyone else. The film playfully depicts a string of new beginnings founded in letting go of the past. Diane isn’t sure what she came to Woodstock for, but what she finds is an open offer of motherly solace, the chance to bond with her children and perhaps the opportunity to open her heart to someone new. She meets a carpenter/singer/songwriter named Jude (Morgan). He’s handsome, generous, impulsive, and really corny. He also clearly adores her. But is Diane ready for romance? Meanwhile her daughter also meets a local (Crawford) who she connects with.

Washington DC Critics Pick The Artist as Best Film of 2011