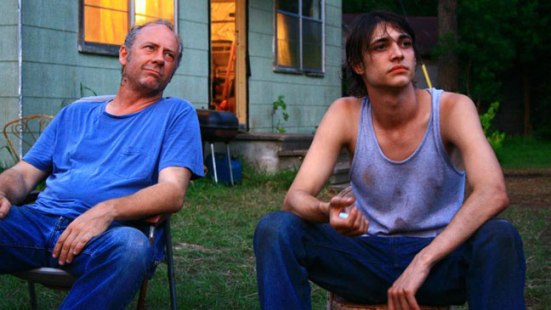 Cook County is a new independent film from first time writer/director David Pomes exploring a specific family and community in rural east Texas, reflecting an entire culture and drug world in America. The film presents the narrative through the eyes of Abe (Ryan Donowho), a teenager living with his meth-cooking and smoking uncle, Bump (Anson Mount). Abe goes day to day simply surviving with his dangerous caretaker, and  trying to protect his young cousin Deandra (Makenna Fitzsimmons) from a drug-addicted future. When Abe’s father, Sonny (Xander Berkeley), shows up after a stint in jail, he promises Abe that he’ll make their lives better. What begins as a promising plan to try to expose Bump and his dealers to the police, becomes more complicated, and more dangerous for Abe and Deandra as Bump spirals further out of control, haunted by paranoia and consumed by his addiction.

David Pomes has made a film exploring a very real problem in much of America, and chose the location of Texas because he heralds from there. The cast and crew filmed in a rural town not far from Houston, and met real people who resembled the characters being portrayed. The film is sparsely made, with just a few main locations and simple yet affective camerawork. The focus is on the characters, and the harsh lives they lead. It is safe to say that Anson Mount steals many scenes (from the stirring opening to the disturbing climax) with his extremely physical and intense performance. As terrifying a person as Bump is, he is also fascinating, and it’s hard to take your eyes off of him.

The film was shelved for the past two years, unable to find a distributor, and Mount’s rise in stardom, due to his role in the television show “Hell on Wheels,” helped it get the support and funds that was needed. It then won awards at South by Southwest, Dallas International Film Festival, and Nashville Film Festival. From these successes, Cook County is finally seeing distribution, and truly deserves it, as it is an impressive first feature, and a moving, as well as distressing, independent film.