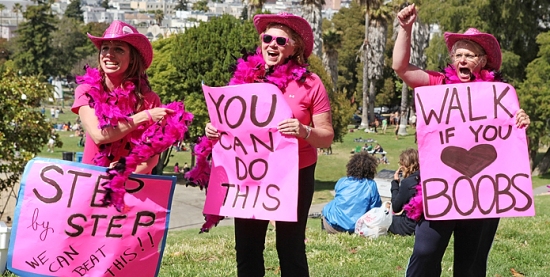 Pink Ribbons, Inc., which had its world premiere in September 2011 at the Toronto International Film Festival and its European premiere at the International Documentary Film Festival Amsterdam, opens theatrically on over 30 screens in cities across Canada, beginning February 3, 2012.

Inspired by the book Pink Ribbons, Inc.: Breast Cancer and the Politics of Philanthropy by Samantha King, Pink Ribbons, Inc. shows how some companies use breast cancer cause-marketing to boost sales, while often contributing only a tiny fraction of proceeds to the cause. It also explores how companies that pollute or sell products containing dangerous chemicals are in on the action, too, using “pink washing” to polish their images, and even shaping the direction of cancer research. The end result is that the environmental causes of breast cancer have been largely ignored, with only a minuscule fraction of the funds going to prevention research.

Pink Ribbons, Inc. also takes us back to the questionable origins of the ubiquitous ribbon. Charlotte Haley was a 68-year-old American woman using peach-coloured ribbons to specifically call attention to the lack of funding for breast cancer prevention. When a cosmetics giant wanted in, Haley refused, because she believed that the company was out to boost profits rather than help women. But she couldn’t stop them when they changed the colour of the ribbon to pink.

Most heartbreaking are the sick and dying women who’ve been pushed to the margins because they don’t suit the triumphal upbeat image of the pink ribbon narrative, what author Samantha King calls “the tyranny of cheerfulness.”

Pink Ribbons, Inc. makes a powerful case that the pink ribbon campaign is failing to achieve the most crucial goal of all: it isn’t helping women live longer, healthier lives. Breast cancer rates are rising. We’ve only seen incremental improvements in chemotherapy and surgery treatments, over decades. Prevention is being vastly underfunded. Something has to change.

But as Pink Ribbons, Inc. argues, until we force a change in the business model for cancer research, that’s not going to happen.

Most of us have had our lives affected by breast cancer, in one way or another. If you have, you owe it to yourself to see this film.