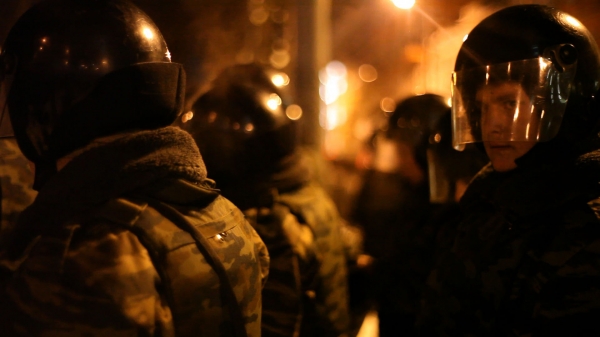 The 14th annual One World International Human Rights Documentary Film Festival has chosen a topical and compelling theme for this year’s event, which will focus on continuing protests and unrest in various parts of the world. One World’s films will show that, even though protest events from Bahrain to Greece to the USA have different means and goals, they all have one common element: committed young people who are demanding change in the established order of things.

For Czech audiences, films from Arab countries in the One World program will be a unique opportunity for them to see recent events in that part of the world formulated and processed into high-quality documentary films, and not just in the form of television news reports. “Until now, it has not been customary for festivals to screen films about such topical events, which are essentially still being played out on the streets,” says One World’s festival director Hana Kulhánková.

“In these films, the thing I appreciate most is the courage of people to take to the streets and risk their lives for democracy,” Kulhánková adds. “For us Czechs, who experienced a peaceful Velvet Revolution, this attitude is unimaginable.”

Kulhánková also stresses that the films in question highlight the fact that overthrowing a dictator in these Arab countries is a long way from “victory” and that they still have a long road ahead.

Nonetheless, the main thematic category, Youth Quake, is not just about the Arab revolutions, but looks at a lot more issues. Young people’s dissatisfaction with the current state of society is also manifesting itself in established democracies. In these places, their protests are against the existing socioeconomic system and they are testing the strength of democratic values and the openness of their governments. For example, besides the Arab revolutions, which have been well covered in the media, this film category also shows young Japanese people completely breaking with tradition in their country and taking to the streets after the disaster in Fukushima, or radical American ecologists who end up in prison as terrorists.

The visual graphic for One World 2012 by the Ex Lovers studio also reflects the theme of this year’s festival. Its creators based it on the observation that two things united all the public protests across various cultures – emotions and handmade banners. “We took the gestures, emotions, and tools that the protesters used to speak about the establishment – spray cans, paints, and markers,” says Zuzana Kubíková from Ex Lovers.

Other film categories at One World 2012 will include With or Without You, which explores social themes, and So-called Civilization¸ which offers environmentally focused documentaries. The films included in the Main Competition and the Right to Know categories will compete for the festival’s principal prizes. The program will also include the latest Czech documentaries.

One World 2012 runs from 6 to 15 March 2012 in Prague before traveling to another 40 Bohemian and Moravian towns and cities. As is now traditional, besides screening hundreds of movies, festival audiences will also have an opportunity to discuss the films with the people who made them and to participate in panel debates with experts. You can find more information at www.oneworld.cz.