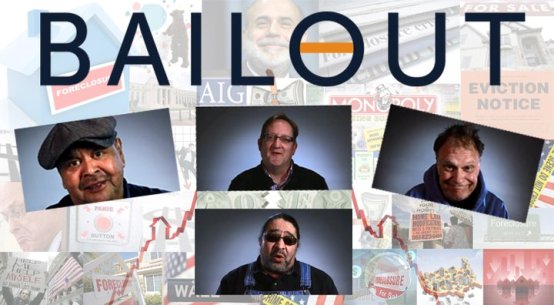 The documentary Bailout will screen at this year’s Derby City Film Festival.

Why? According to the filmmakers, since “Gonzo Journalism” was born at the Derby, it’s only fitting that Bailout will screen at this year’s Derby City Film Festival.

The “Gonzo” style deviates from standard factual narratives by altogether jettisoning any pretext of objectivity where the author figures prominently as a character in the story.

That definition fits the new feature documentary Bailout like silks on a jockey. Bailout is the tale of an unemployed Chicago lawyer who stops paying his mortgage and enlists four friends (also unemployed) to join him in a Winnebago trip to Las Vegas. Their plan is tear a page out of Wall Street’s playbook and piss away the bank’s money by gambling and partying their asses off. Along the way our gang discovers first hand how Americans have been adversely affected by the financial crisis, principally through foreclosures.

Bailout focuses on unchecked financial fraud and the refusal to punish such fraud that lies at the root of our nation’s illness, examined through the well informed filter of its lead character, John Titus and his “dukes of moral hazard”.

While many financial documentaries have done a great job of enraging audiences and leaving us shaking our heads, Bailout is also a call to action culminating with the Tea Party and subsequently the Occupy Wall Street movement -both of which saw ordinary Americans railing against bailouts of recklessly greedy banks- Bailout inspires Americans to exercise their right to speak out against injustice and take their grievances to the streets until their voices are heard.

To quote Sean Fahey the director, “It will make you laugh, it will piss you off, and I can promise that you will rarely see a stranger form of patriotism from a stranger group of people”.