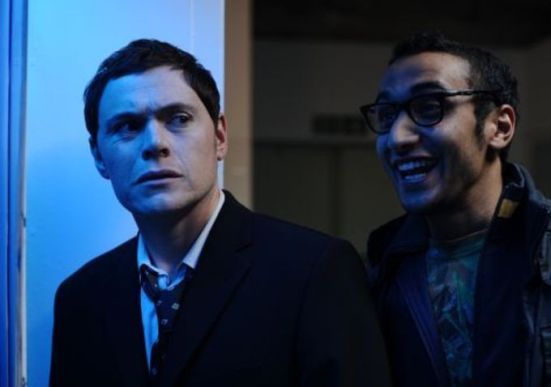 The 27th Annual Santa Barbara International Film Festival announced the winners of the 2012 festival competition and awarded UP THERE, directed by Zam Salim won the Panavision Spirit Award for Independent Cinema.

The winning films are as follows:

The Panavision Spirit Award for Independent Cinema, given to a unique independent feature that has been made outside mainstream Hollywood, went to UP THERE, directed by Zam Salim, about Martin, whois stuck in a dead-end job, welcoming the newly departed into the afterlife. All he dreams of is going “up there,” and he attempts to cope with his death by keeping his nose clean and minding his own business. But all this is thrown into disarray when, in order to track down an errant lost soul. Winner received a Panavision camera package worth $60,000.

The Best International Film Award went to FREE MEN, directed by Ismael Ferroukhi about an Algerian Muslim immigrant who joins the French Resistance to save Algerian Jews.

The Nueva Vision Award for the best Spanish/Latin American film was awarded to FOUND MEMORIES, directed by Julia Murat. A young photographer finds a forgotten ghost town where only a handful of old people live, and changes their lives forever.

The jury awarded an Honorable Mention to THE RUMBLE OF THE STONES (El Rumor de las Piedras), directed by Alejandro Bellame Palacios. Venezuela’s official submission for the Academy Awards, Rumble of the Stones is a heartfelt and compelling portrait of the enduring power of a mother’s love against the backdrop of the social problems of modern-day Venezuela

The Cinema Nouveau Award went to HEAT WAVE (Apres Le Sud),directed by Jean- Jacques Jauffret. Based on a true story, HEAT WAVE offers up a story from intersecting points of view where different destinies cross paths and are reunited by a tragic event.

The Fund for Santa Barbara Social Justice Award Sponsored by The Fund for Santa Barbara for a documentary film that addresses social justice issues also went to DIRTY ENERGY, directed by Bryan Hopkins, which tells the personal story of those directly affected by the 2010 Deepwater Horizon spill and who are now struggling to rebuild their lives amidst the economic devastation and long-term health risks. Winner receives $2500.

The Audience Choice Award, sponsored by the SB Independent, went to STARBUCK, directed by Ken Scott, about a former sperm donor who discovers he’s the father of 533 children, 142 of whom have filed a class action lawsuit to determine the identity of their biological father, known only by the pseudonym Starbuck.