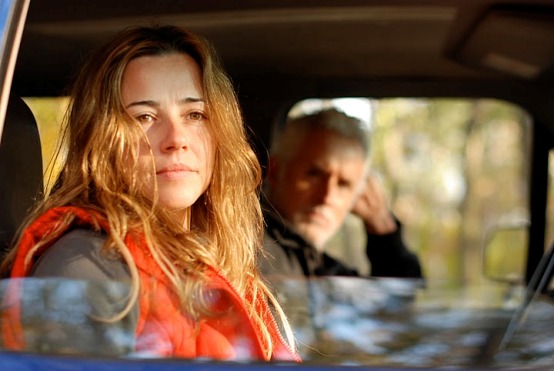 There has rarely been such a non-formulaic and genuinely touching portrayal of a soldier returning home as Liza Johnson’s “Return,” starring the phenomenal Linda Cardelinni (“E.R.”) and always terrific Michael Shannon, opening today in limited release.

To say a movie is independent film at is finest doesn’t even translate any longer, of course, but if it still does in any vernacular, this tiny, perfectly on-point little film is exactly it.

Cardelinni plays Kelli, home from a year’s tour of duty (Iraq? Afghanistan? We are never quite certain.) Shannon plays Mike, her plumber husband who is so game to comfort his returning soldier wife he initially rebuffs her playful advances, advising her primly that “They warned us about rushing this at the Spouse Support Group!”This is a new era, Johnson explains right away, one which we all know, or are supposed to understand, full well the devastating effects of PTSD and trauma war has on the average American soul.

Kelli is thrilled to be back home with her two young daughters, in her sweet little home, and even at her dull factory job. But when out partying with the girls one night, doing shots and cracking up, the conversation slowly delves into “what she saw over there.”

Everyone there, Kelli keeps insisting, had it worse than me. Lots of people. She was only working at a supply base, hauling boxes. Yes, she saw dead bodies, dead animals, “some crazy, fucked-up shit.” But still…Kelli refuses to acknowledge their power over her. Never letting anyone in, and never allowing herself to truly feel her dangerously deep feelings about her time in the National Guard, Kelli soon becomes a slow-burning fuse.

I cannot speak enough about Cardelinni’s performance. Back when actresses still cared about what they were doing for a living, rather than simply shopping and talking about that process, this was the kind of performance they gave: One full of true heart, completely free of stereotypes, and one that free falls into delivering exactly what you need from this character: A person casting about for answers without realizing or knowing what the exact problem is, in the first place. The human condition? Absolutely.

Johnson and the performers show us that regardless of having suffered through a terrible experience or trauma or not, there are just no pert answers, no all-encompassing cure for what ails us, and no trite way out of feeling what you need to really experience in order to heal. This film seems to be saying, that, sometimes, you simply cannot go home again.

At the end of the film, Kelli not only makes the only logical choice left, but it is, quite thankfully almost, made for her.

Please check out “Return” this weekend. Let’s help slam this wonderful little film  out of the park. Playing in NYC at Cinema Village East, and in Brooklyn at Indie Screen Cinema.