It opens in limited release on February 17. 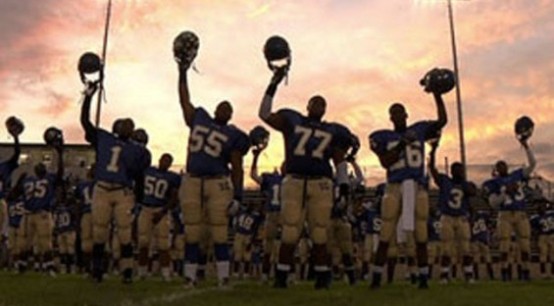 Set against the backdrop of a high school football season, Dan Lindsay and T.J. Martin’s documentary UNDEFEATED is an intimate chronicle of three underprivileged student-athletes from inner-city Memphis and the volunteer coach trying to help them beat the odds on and off the field. Founded in 1899, Manassas High School in North Memphis has never seen its football team, the Tigers, win a playoff game. In recent decades, the last-place Tigers had gone so far as to sell its regular season games to rival schools looking to chalk up an easy win. That began to change in 2004, when Bill Courtney, former high school football coach turned businessman, volunteered to lend a hand. Focusing on nurturing emotional as well as physical strength, Courtney has helped the Tigers find their footing and their confidence. The 2009 Summer/Fall football season promises to be the Tigers’ best ever – perhaps the season that finally breaks the 110 year-old playoff jinx. For players and coaches alike, the season will be not only about winning games – it will be about how they grapple with the unforeseeable events that are part of football and part of life.

“I am excited to partner with Harvey Weinstein on this incredible project. UNDEFEATED is a great American story with a lot of heart and soul. It had a profound effect on me and I couldn’t get it out of my mind when I saw it. There is so much truth and so much hope in this film, and I feel passionately that everyone who sees it will be inspired,” commented Combs.

Said Weinstein, “There’s a moment in UNDEFEATED when the coach tells the players, ‘Football doesn’t build character – football reveals character.’ I think that’s one of the reasons football is so important to me. But that line could just as easily apply to UNDEFEATED itself. In telling the story of a football team, this film says so much about individuals, about community and about our country. I’m so proud of UNDEFEATED, and we feel very fortunate to have Sean on board to bring this story to audiences now and in the future.”