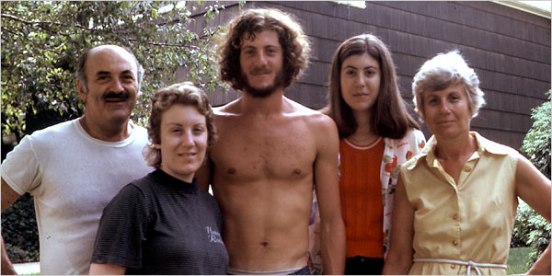 The program features the work of 9 directors: Steven Ascher, Alan Berliner, Doug Block, Morgan Dews, Alfred Guzzetti, Jeanne Jordan, Ed Pincus, Lucia Small, and Marco Williams, who will attend the festival to take part in the exhibition of their films.

51 Birch Street (Director: Doug Block)
Shortly after his mother’s death, Doug Block is stunned to learn that his father is moving in with his secretary from 40 years before—so begins his journey to understand the parents he thought he knew.

Diaries (Director: Ed Pincus)
In this intensely personal memoir, Ed Pincus films his wife, children, and lovers in an effort to faithfully record his, and their, struggle to find and experience intimacy, commitment, and fulfillment.

In Search of Our Fathers (Director: Marco Williams)
Marco Williams’s quest to discover the father he never knew ultimately reveals more about the women in his family, particularly his mother and her efforts to enrich his upbringing.

Intimate Stranger (Director: Alan Berliner)
This vibrant film is full of the still photographs, celluloid film, and ephemera of a well-traveled life, that of Alan Berliner’s grandfather, whose yearning for success and acclaim took him far away from home.

Must Read After My Death (Director: Morgan Dews)
After uncovering a trove of family movies and audio recordings, Morgan Dews assembles the materials together to present this daring portrait of his grandparents’ strained relationship, and their very different expectations of family life.

My Father, The Genius (Director: Lucia Small)
Architect Glen Small asks his estranged daughter, Lucia, to craft his biography, which ultimately evolves into this documentary that delicately traces the lines of tension between artistic brilliance and familial disappointment.

TRANSLATING EDWIN HONIG: A Poet’s Alzheimer’s (Director: Alan Berliner)
A transfixing portrayal of a poet as he succumbs to a fading memory, and his patterns of speech give way to new kinds of artistic expression.

TROUBLESOME CREEK: A Midwestern (Directors: Jeanne Jordan, Steven Ascher)
Faced with mounting debts, the Jordan family embraces a radical plan to save their Iowa farm. With husband Steven Ascher, Jeanne Jordan poignantly chronicles the emotional and physical landscape of her parents’ attempt to maintain their way of life.