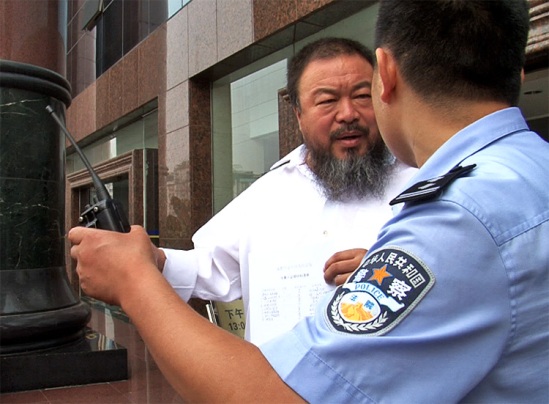 In addition to the opening night Canadian premiere of Alison Klayman’s AI WEIWEI: NEVER SORRY, an up-close portrait at of the renowned Chinese activist and artist, other notable films in the Special Presentations program include: Bart Layton’s THE IMPOSTER, which depicts a lost and found boy who may not be who he claims; James Swirsky and Lisanne Pajot’s INDIE GAME: THE MOVIE, a look into the lives of video game developers; Lauren Greenfield’s THE QUEEN OF VERSAILLES, a portrait of an eccentric billionaire family facing the economic crisis; Kevin Macdonald’s MARLEY, the definitive biography of reggae artist Bob Marley; Christian Bonke and Andreas Koefoed’s BALLROOM DANCER, a look at a Latin ballroom champion’s ambitious comeback plans; and Yung Chang’s CHINA HEAVYWEIGHT, an intimate portrayal of a boxing coach training poor teens in rural China.

In the competitive Canadian Spectrum program, notable films include: Christy Garland’s THE BASTARD SINGS THE SWEETEST SONG, the story of a tumultuous mother-son relationship in Guyana; Omar Majeed and Ryan Mullins’ THE FROG PRINCES, the story of a developmentally challenged theatre group’s struggle to mount an ambitious production; Angad Singh Bhalla’s HERMAN’S HOUSE, a trip through the years with jailed Black Panther activist Herman Wallace; and Jonah Bekhor and Zach Math’s THE FINAL MEMBER, which looks at Iceland’s penis museum’s search for a critical artifact.

In the competitive International Spectrum program, notable films include: Bill Ross and Turner Ross’ TCHOUPITOULAS, the adventures of three teenagers exploring the heart of New Orleans at night; Ra’anan Alexandrowicz’s THE LAW IN THESE PARTS, a candid glimpse into the legal minds behind the rules and regulations governing the Occupied Territories; Elizabeth Mims and Jason Tippet’s ONLY THE YOUNG, a look at a last stolen summer of first loves; and Sean McAllister’s THE RELUCTANT REVOLUTIONARY, a portrait of a tour guide caught in the 2011 uprising in Yemen’s capital.

In the World Showcase program, notable films include: Tiffany Sudela-Junker’s MY NAME IS FAITH, the story of a 12-year-old girl’s struggle to overcome trauma and accept her adopted family; Beth Murphy’s THE LIST, which reveals an American’s crusade for refuge for his Iraqi colleagues; Alessandro Comodin’s SUMMER OF GIACOMO, a 19-year-old deaf boy spends a summer day with a childhood friend; and Peter Gerdehag’s WOMEN WITH COWS, the story of two sisters and their complicated relationship with a dozen cows.

The Made In Southeastern Europe program includes: Lena Müller and Dragan von Petrovic’s DRAGAN WENDE – WEST BERLIN, about West Berlin in 1970s and now as seen through a working-class Serbian émigré; Ed Moschitz’s MAMA ILLEGAL, a glimpse into the lives of Moldovan women who struggle to support their families; and András Kollmann’s STRONG – A RECOVERY STORY, about a mountaineer whose desire to climb does not fade following a catastrophic injury.

The Next program includes: Will Lovelace and Dylan Southern’s SHUT UP AND PLAY THE HITS, where LCD Soundsystem front-man James Murphy’s bids farewell to his fans; Poull Brien’s CHARLES BRADLEY: SOUL OF AMERICA, a heart-warming story of a 62-year-old illiterate James Brown impersonator from Brooklyn; Maya Gallus’ THE MYSTERY OF MAZO DE LA ROCHE, a look at the mysterious life of the Canadian author; and Sylvia Caminer’s AN AFFAIR OF THE HEART, a peek into the world of devoted Rick Springfield fans.

The Rise Against program includes: Brian Knappenberger’s WE ARE LEGION: THE STORY OF THE HACKTIVISTS, a radical collective’s fight that redefined civil disobedience; Guy Davidi and Emad Burnat’s 5 BROKEN CAMERAS, a portrait of a West Bank village threatened by an encroaching Israeli settlement; and Petr Lom’s BACK TO THE SQUARE, a look at citizens in post-revolution Egypt.

The Nightvision program includes: Chris James Thompson’s JEFF, a biography of serial killer Jeffrey Dahmer; Mary Kerr’s RADIOMAN, the story of Radioman, a fixture in the NYC film scene; and James Franco and Ian Olds’ FRANCOPHRENIA (OR: DON’T KILL ME, I KNOW WHERE THE BABY IS, a wild behind-the-scenes doc with James Franco on General Hospital.

The Documentary Plays Itself program includes: Phie Ambo’s GAMBLER, which follows director Nicholas Winding Refn as he shoots sequels of his cult classic; Louis Pepe and Keith Fulton’s LOST IN LA MANCHA, which captures Terry Gilliam’s ill-fated attempt to film the Don Quixote story; and Thom Andersen’s LOS ANGELES PLAYS ITSELF, a look at how Los Angeles is depicted on film.