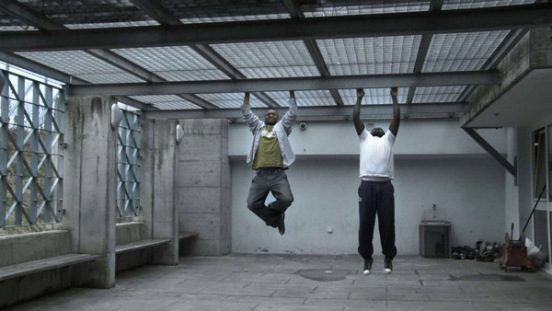 The Jury, Judith Ehrlich, Eric Metzgar, and Marco Williams, stated, “Director Fernand Melgar takes us deep inside the world of detained immigrants in Switzerland. With incredible access and patient observation, we experience the complex and powerful relationships between the captives and their captors. An exceptional work of vérité filmmaking, “Special Flight” forces us to confront the contradictions of humane incarceration.”

A Special Jury Award was also presented to “The Law in These Parts (Shilton Ha’Chok),” directed by Ra’anan Alexandrowicz, a meticulously constructed exploration of the complex military laws imposed by Israel on citizens in the occupied territories. The Jury commented, “The Law in These Parts” we honor with a Special Jury Award. We admire its intelligence and unique Brechtian treatment of a very controversial subject.”

The Jury, Steven Ascher, Jessica Edwards, and Edwin Martinez, stated: “The Jury Award goes to an elegantly realized portrait of a marriage that tenderly explores a husband’s last days with his wife. Beautifully observed, expertly paced, “The Time We Have” intimately captures the power of simple gestures between two people who will always be in love.”

The Jury awarded an honorable mention to “Sivan,” directed by Zohar Elefant, a minimalist portrait of an Israeli soccer fan in thrall to a team and an obsession.  The Jury said: “This Special Jury Award is presented to “Sivan,” a film that employs an innovative directorial approach to a fascinating character to capture a myriad of themes and emotions from one camera angle.”

“Trash Dance,” directed by Andrew Garrison, received the Full Frame Audience Award.  The film documents an unusual partnership between a dancer and the Austin Department of Solid Waste Services to stage a public performance starring man, music, and machine.” Sponsored by Merge Records, the Audience Award is determined by counting audience ballots filled out during the festival.

An Honorable Mention was presented to the short with the highest score, “Fanuzzi’s Gold,” directed by Georgia Gruzen. The film focuses on Ed Fanuzzi, a Staten Island inventor, treasure hunter, and eternal optimist, who sees gold where others see trash.

“Mr. Cao Goes to Washington,” directed by S. Leo Chiang, received the Full Frame Inspiration Award.  The film captures rookie congressman Joseph Cao of Louisiana as he angers fellow Republicans by befriending President Obama; will bipartisanship reward or ruin his chances for re-election?Sponsored by the Hartley Film Foundation, this award is presented to the film that best exemplifies the value and relevance of world religions and spirituality. Jim Klein, Sarah Masters, and Fiona Otway participated on the Jury.

The Full Frame President’s Award was presented to the “Grandmothers (Abuelas),” directed by Afarin Eghbal. This animated documentary about Argentina’s Abuelas de Plaza de Mayo features stories of women who search for their missing grandchildren. Sponsored by Duke University and aimed at recognizing up-and-coming filmmakers, this prize is awarded to the best student film. Representatives on behalf of the President’s Office juried the prize.

“ESCAPE FIRE: The Fight to Rescue American Healthcare,” directed by Susan Froemke and Matthew Heineman, received The Kathleen Bryan Edwards Award for Human Rights.  American healthcare has evolved into a profit-driven disease-care system—this film closely examines the medical industry and bold new measures that may help ease what ails us. Provided by the Julian Price Family Foundation, this award is presented to a film that addresses a significant human rights issue in the United States. Representatives from the Kathleen Bryan Edwards family juried the prize: Anne Arwood, Laura Edwards, Clay Farland, Margaret Griffin, and Pricey Harrison.

The Nicholas School Environmental Award was presented to “Chasing Ice” directed by Jeff Orlowski. In this film, scientific fact and aesthetic beauty merge in monumental and dramatic time-lapse photos illustrating global warming’s chilling ravages. The Nicholas School Environmental Award honors the film that best depicts the conflict between our drive to improve living standards through development and modernization, and the imperative to preserve both the natural environment that sustains us and the heritages that define us. Representatives from the Nicholas School of the Environment juried the Prize: Cindy Horn, Stephen Nemeth, Rebecca Patton, and Tom Rankin.

The Full Frame Documentary Film Festival was held April 12-15 in downtown Durham with Duke University as the presenting sponsor.  105 films representing 27 countries were shown from morning to midnight, many with panel discussions following the screening.  In addition to the NEW DOCS Program, Full Frame presented a Thematic Program consisting of 10 films, a collection of four films surrounding the Full Frame Tribute, and an Invited Program comprised of 30 films.

Dakota Fanning, Kim Cattrall and Michael Moore Among 39 to Serve on Jury For 2012 Tribeca Film Festival