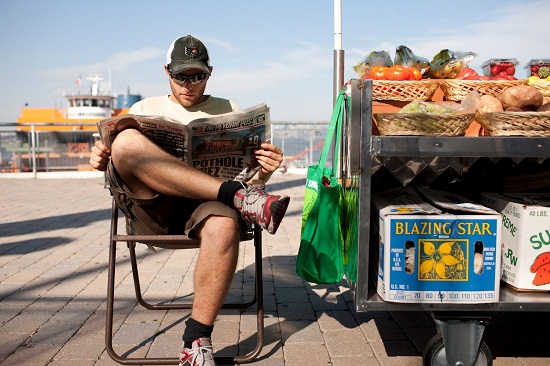 Oscilloscope Laboratories has picked up Mary Mazzio’s documentary The Apple Pushers for distribution in the US. Narrated by Academy Award® nominee Edward Norton, The Apple Pushers follows immigrant street vendors who are rolling fresh fruits and vegetables into poor neighborhoods of New York City, where finding a fresh red ripe apple can be a serious challenge. These pushcart vendors, who have immigrated from all parts of the world and have sacrificed so much to come to the United States, are now part of an experiment in New York to help solve the food desert crisis and skyrocketing obesity rates in urban communities.

The film premiered to critical acclaim at The Hamptons International Film Festival 2011 and has been screened at Lincoln Center in New York City, and other major festivals, universities, and government showings. It will next be seen as part of The Whole Foods DoSomethingReel Film Festival, which will host screenings of the film in 5 major cities around the country on April 22–Earth Day. Oscilloscope will make the film available on VOD nationwide following the festival, and will continue to book special screenings and engagements across the country. The Apple Pushers will also be broadcast on public television’s WORLD channel in May and June.

The film is written and directed by Mary Mazzio, and produced by Mazzio, Tom Scott, and Christine Vachon.