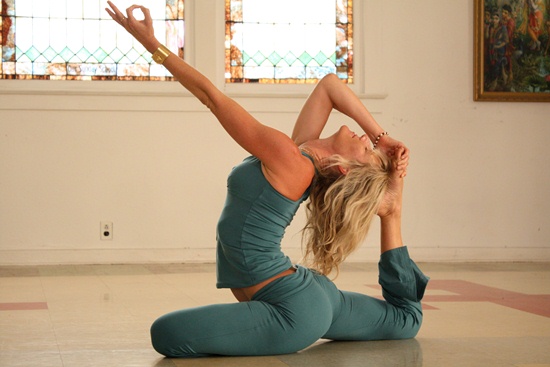 YOGAWOMAN, the award winning documentary (narrated by Annette Bening, a keen yoga advocate)will open at Angelika Film Center in NYC on October 19 and at Laemmle Monica 4-Plex; NoHo 7 and Playhouse 7 on October 26, 2012.  A national release will follow.

The film is described as … “Through rich personal stories, YOGAWOMAN reveals how yoga has utterly transformed the lives of thousands of over-stimulated, over-scheduled, and multi tasking modern women. From the buzzing streets of Manhattan to the dusty slums of Kenya, from the golden beaches of Australia to the serene piazzas of Italy, the film follows the heart-rending stories of women who have found a lifeline through this magical and mystical practice.

How did the ancient practice of yoga, designed in India thousands of years ago – for men, become so relevant and increasingly popular in the lives of millions of American women? There are over 20 million people now practicing yoga in the United States, 80 percent of whom are women.

Yoga was brought to the west from India by a lineage of male teachers. Now there’s a generation of women who are leading the way. They’re strong, they’re inspiring, and they’re radically changing people’s lives.  YOGAWOMAN uncovers a global phenomenon that has changed the face of yoga forever. Led by a new generation of dynamic female teachers, this “new” yoga replaces the male-centered, more rigid style with a distinctly feminine practice that honors intuition, family, strength, flow, connection, community, activism and the cyclical nature of women’s lives.

In intimate interviews with the world’s leading experts, many who have become worldwide icons with rock-star status, YOGAWOMAN captures how these teachers have blazed a new trail for women. World-renowned teachers appearing in YOGAWOMAN include Patricia Walden, Sharon Gannon, Shiva Rea, Angela Farmer, Cyndi Lee, Seane Corn, Donna Farhi and forward-thinking medical professionals such as integrative physician Dr. Sara Gottfried and world-renowned research scientist Dr. Shirley Telles. YOGAWOMAN is the first film of its kind to bring together these luminaries, distilling their wisdom and spreading their message of peace and empowerment for the benefit of women everywhere.

A revolution brews in yoga studios, hospitals, prison cells and living rooms around the globe. In record numbers women are discovering their own strength, vitality, peace and power through yoga. Claiming this ancient spiritual path from its traditionally male form, the result is a radical transformation of yoga into an international multi billion dollar industry.”