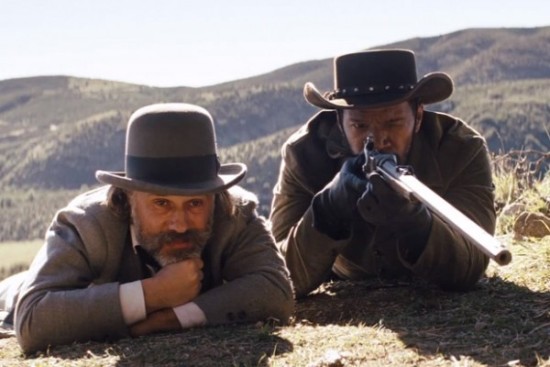 Django Unchained is a shootem-up-bang-bang western-style movie that strives hard to convey the feeling of being in the 1800’s during the period when slavery was the law of the land in some parts of the USA. The film is set in the South where a slave, Django, (played by Jamie Foxx) ends up partnering with Dr.King Schultz, a white German bounty hunter (played by Christoph Waltz.) Shultz is looking for the Brittle Brothers as they have a huge bounty on their head and are wanted “Dead or Alive.” Django promises Schultz that he will lead him to the brothers if he will help him find his wife, a German-speaking slave named Broomhilda (played by Kerry Washington) from whom he was separated during a slave trade.

Schultz teaches Django how to be a precise marksman and they start their journey to find the Brittle Brothers and Broomhilda. Their hunt for the brothers was successful. The search for Broomhilda leads them to a plantation known as “Candy Land.” The master of Candy Land, Calvin Candie is played by Leonardo DiCaprio. Schultz and Django are welcomed to the plantation with the understanding that they are offering to buy a nigger to fight “kind of like dog fighting” but they used the slaves instead as a form of “entertainment”. Calvin Candie couldn’t resist that type of offer and the scheme to buy a nigger to fight and then include Broomhilda in the package would’ve went off without a hitch until a loyal house slave, Stephen (Samuel Jackson) who had been with the plantation for years told Calvin Candie that he was getting conned by a nigger. He told him that they were not interested in buying a fighting nigger; they came for the gal Broomhilda. This infuriated Calvin Candie and he forced Django and Schultz to pay $12,000 for Broomhilda or he was going to kill her right there, so they paid up and Broomhilda freedom papers were drawn up and signed. As a final condition, Calvin insisted that Schultz shake his hand to seal the deal before he would give him her emancipation papers. Schultz declined, but Calvin insisted and finally, Schultz acted as if he was going to shake Calvin’s hand and shot him directly in the chest. This started a chain of more bloody events with tons of shooting, nigger calling, explosions and more blood.

If you want to know if Django was able to rescue Broomhilda since Schultz didn’t shake Calvin Candi’s hand and Calvin still held her freedom papers, or even if Django, Schultz and Broomhilda survived the shootout following the killing of Calvin Candi, you will have to go check out the film.

This film is rated R and for very good reason. There is so much violence, bloodshed and every other word is nigger. I literally had a nightmare when I went to bed that night. So I will say this film is not for the squeamish. Over all I give it 2 stars out of 5