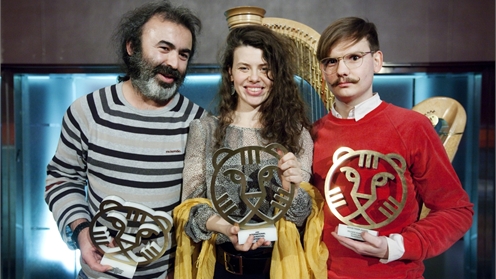 My Dog Killer (Môj pes Killer) by Mira Fornay, Soldier Jane (Soldate Jeannette) by Daniel Hoesl, and Fat Shaker (Larzanandeye charbi) by Mohammad Shirvani were announced as the three-way winners of the Hivos Tiger Awards at the 2013 International Film Festival Rotterdam, in Rotterdam, The Netherlands. The directors win a prize of €15.000.

My Dog Killer (Môj pes Killer) by Mira Fornay (Slovakia/Czech Republic, 2013). An unflinching study of a troubled teen in small-town Slovakia, the film was praised by its jury for ‘showing a very strong subject from the inside’

Soldier Jane (Soldate Jeannette) by Daniel Hoesl (Austria, 2012). A provocative portrait of two women from different ends of the social spectrum, Hoesl’s debut feature was commended for it ‘strong imagery and visual power.’

What They Don’t Talk About When They Talk About Love (Indonesia, 2013) is the winner of NETPAC (Network for the Promotion of Asian Cinema) Award 2013.

The other winners of 2013 International Film Festival Rotterdam.

Pretty Butterflies (Bellas mariposas) by Salvatore Mereu (Italy, 2012) is the winner of the festival’s new Big Screen Award Competition. The film follows a day in the life of a young Sardinian girl.

The Dutch Circle of Film Critics (KNF) Jury award – chosen from the ten films in The Big Screen Award Competition – went to The Future (Il futuro) by Alicia Scherson (Chile/Germany/Italy/Spain, 2013).