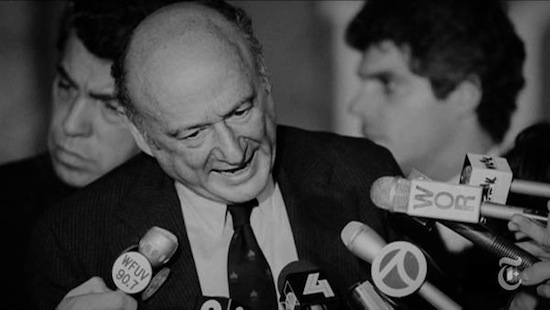 KOCH, a documentary by Neil Barsky will open in Los Angeles on March 1 at The Royal, Town Center and Playhouse 7.  Film opens in Palm Springs on March 8.

Former Mayor Ed Koch is described as “the quintessential New Yorker.” Ferocious, charismatic, and hilariously blunt, Koch ruled New York from 1978 to 1989—a down-and-dirty decade of grit, graffiti, near-bankruptcy and rampant crime. Ed Koch passed away at at the of 88 on February 1, 2013 – the day KOCH documentary opened in NYC.”

With KOCH, first-time filmmaker (and former Wall Street Journal reporter) Neil Barsky crafts an intimate and revealing portrait of this intensely private man, his legacy as a political titan, and the town he helped transform. The tumult of his three terms included a fiercely competitive 1977 election; an infamous 1980 transit strike; the burgeoning AIDS epidemic; landmark housing renewal initiatives; and an irreparable municipal corruption scandal. Through candid interviews and rare archival footage, KOCH thrillingly chronicles the personal and political toll of running the world’s most wondrous city in a time of upheaval and reinvention.

KOCH is a beautiful documentary examining one man’s fascinating journey into rehabilitating the very unhealthy city of New York in the 1980s.  Sometime stubborn and unapologetic, Koch also opens the door to his much-speculated-about private life, which he doesn’t mind being asked about, so long you don’t mind being told to mind your own business. With his trademark greeting “How I’m Doin, ’’ his combative energy and his charming wit, Ed Koch makes for the perfect documentary subject. Says director Neil Barsky: “Making a documentary about Ed Koch was an easy call. I cannot think of a New Yorker