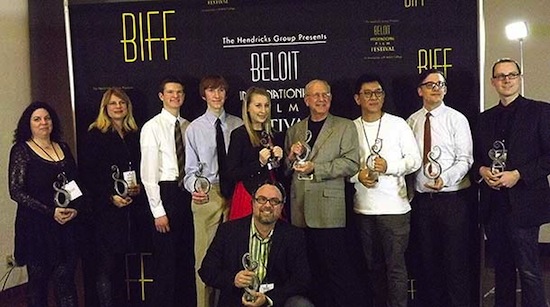 The 2013 BIFFYs were presented at the Launch Party kicking off the eighth annual Beloit International Film Festival which runs  February 14 through Sunday, February 17th, 2013 in Beloit, Janesville and Rockford, Wisconsin.

The top prize, the BIFFY for Best Feature Film, went to Azooma, a South Korean film. It is the story of a young mother who seeks revenge for the rape of her 10 year-old daughter. Disappointed by the indifference of the police, she decides to chase down the rapist herself. South Korean filmmaker Jiseung Lee was on hand to receive the award.

The BIFFY for Best Documentary went to Fambul Tok (Family Talk) which tells the story of healing in post-conflict Sierra Leone through intimate stories of perpetrators and victims in an unprecedented program of tradition-based truth-telling and forgiveness ceremonies. The award went to U.S. filmmakers Sara and Rory Kennedy.

Best Short Film: (under 45 minutes)
This went to Treasure, a sweet coming-of-age Asian film starting with the universal question: What is time? The film explores the concept of time between two generations. The 11-minute film from Singapore (subtitled) is the work of Sun Jun Hui and is part of Short Slot 2 at BIFF.

Best Animation:
The BIFFY for animation went to Kirsten Lapore for her American-made film, Bottle. The six-minute film is animated on location at a beach, in snow and underwater.  This stop-motion short details a transoceanic conversation between two characters via objects in a bottle. It is part of Short Slot 1 at BIFF.

Best Student Film:
The award went to The Vampire Formerly Known as Dracula, a campy journey with Dracula as he attempts to assimilate into a modern society. Part of Short Slot 4, it was created by Nate Schardin, a Milwaukee Area Technical College student.

Best Wisconsin Film:
The award went to Little Red and Milwaukee filmmakers Tate Bunker and Miles O’Neil. This hauntingly beautiful adventure film is a contemporary retelling of the childhood Little Red Riding Hood tale as a wolfish stalker pursues preteen Milwaukeean ‘Red’ on her whimsical runaway to Florida. Happily ever after does not come easily or without a price.

Best Screenplay:
This award went to QWERTY. The American made R-rated comedy is the creation of filmmakers Bill Sebastian and Jeremy Truelove and screenwriter Juliet McDaniel. In it, the socially outcast, but verbally gifted Zoe, when not eating, drinking and dreaming Scrabble, works a lonely job at the Illinois Department of Motor Vehicles screening personalized license plates for hidden dirty words or messages. While shopping she meets Marty, a down-on-his-luck security guard in the midst of a career-changing public meltdown.

REVIEW: Sorting Out Heads: Barbering as a Profession of Identity in The Fade