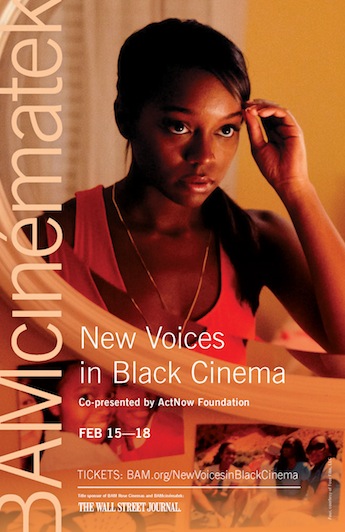 The third annual New Voices in Black Cinema festival runs from Friday, February 15 – Monday, February 18, 2013.  The New Voices in Black Cinema festival reflects the wide spectrum of views and themes within the Black community from Brooklyn to Italy and beyond.  The four day film festival showcases 27 of the best in independent feature films, short films and documentaries from up and coming directors, producers, and talent throughout the Diaspora. All films will be shown at BAM (in the Peter Jay Sharp Building) located at 30 Lafayette Avenue, Brooklyn, NY 11217, which has been the festival’s home since its inception.

The opening night film Big Words (2012, 97 min. – Friday, February 16) directed by journalist-turned-director Neil Drumming makes its New York premiere fresh off of its run at the 2013 Slamdance Film Festival.  This fresh comedic drama starring Dorian Missick (“Southland”, Two Weeks Notice), Gbenga Akinnagbe (“The Wire”) and Yaya Alafia (The Kids Are All Right) takes place in Brooklyn on the eve of President Barack Obama’s history-making 2008 election as three self-absorbed friends, once members of a promising hip-hop trio, cross paths once again and discover that despite dreams deferred and the extreme changes in their lives that some things never change.

No Homo (2012, 78 min. – Monday, February 18), directed by Brooklyn filmmaker Goddey Asemota, focuses on two aspiring fashion designers who sell custom shirts on the streets of SoHo. Because of their love of fashion the two are constantly questioned about their sexuality. As a gag they make a shirt with the logo “No Homo” on the front and sell them at their stand, which leads to their unlikely meteoric rise in the fashion world.

The Undershepherd (2012, 108 min. – Saturday, February 17) directed by Russ Parr, with Isaiah Washington (“Grey’s Anatomy”, Clockers) Lamman Rucker (Why Did I Get Married?), Malinda Williams (“Soul Food”) and Vanessa Bell Calloway (Coming to America) is a controversial tale of two ministers, LC (Washington) and Roland (Rucker), best friends and brothers in Christ.  When the head preacher of their church plans his retirement, mild-mannered character LC becomes overcome by his access to power, money earned through his ministry, and slowly transforms into a ruthless business man.