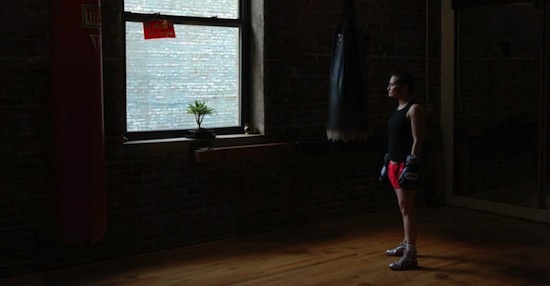 The World Premiere of Fight Like A Girl at the 2013 American Documentary Film Festival, will screen at 4:30pm on Fri. Apr 5, 2013, at the Cinemark Century Theatres at The River in Rancho Mirage, California. Jill Morley’s documentary, Fight Like A Girl, is a gritty, first person insider’s narrative shot over five years.

March 25, 2013, Palm Springs, CA – Boxers training for the Golden Gloves – the world’s most famous amateur boxing tournament – live in a world of sweaty leather gloves thudding against heavy bags, twirling jump ropes, and fierce competition. Many of these rising fighters must overcome obstacles of child abuse, depression, addiction and eating disorders to become champions on their own terms, facing their own mortality and demons within. The game changer: these fighters are women.

Jill Morley’s documentary, Fight Like A Girl, is a gritty, first person insider’s narrative shot over five years. Delving into the little-known world of female boxers, Jill discovers they all have a lot in common. Emotional traumas surface to reveal histories of battles with suicide, abuse, sexism, depression, racism and drugs.

While there has always been a fascination with women fighting, they were not allowed to compete in the New York Golden Gloves until 1995. 2012 saw the debut of female boxing in the Olympic games. From amateurs training for local tournaments to world champions, you meet the women who are passionate about fighting hard.

“When I decided to compete in the New York Golden Gloves, I was fascinated by this sisterhood of female boxers,” says Morley. “I realized how much more I had in common with these women than I originally thought. That inspired me to tell their stories. And gave me courage to tell my own.”

Taking us into the world of sweaty boxing gyms where women must fight for respect in an alpha male culture, Fight Like A Girl shows the real fight that happens within, and the struggle to emerge as champions inside and outside the ring. The World Premiere of Fight Like A Girl will screen at 4:30pm on Fri. Apr 5, 2013, at the Cinemark Century Theatres at The River in Rancho Mirage.

For Tickets and/or More Information,

via: The American Documentary Film Festival