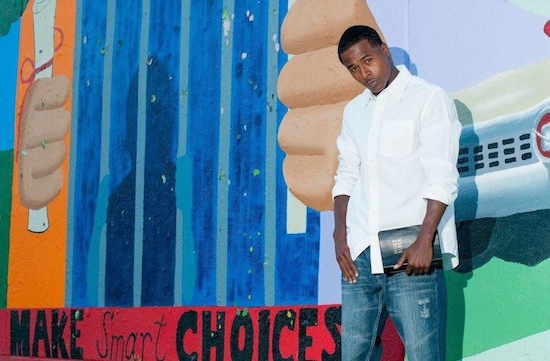 It is an age old conclusion that experience is the best teacher. A hands on tool when applied can be the greatest conduit to redemption, and maturation.  An a youngster, Indy filmmaker Damon Terry;’s life was marred by much trial and tribulation. At his own doing, he became a young man on his way to being a statistic for all intents and purposes. Stereotypically, and similar to many others reared in the environment which spawned his upbringing. Ultimately landing in prison, Terry used the time to reflect and rectify. Overhauling not only his perspective, but his goals in life he was ready for his second chance at freedom, and opportunity. When it came, he hit the grown running; inspired by a restored faith in a highpower, whom he praises at every moment, Damon Terry was moved by a calling to literature and eventually script-writing. A passion was born, a career iniated, and the rest, is the subject for documentation. Often compared to others whose platform of the gospel, has brought upon exponential success, Damon Terry seeks to follow in that path, yet in a uniquely refreshing manner which adds to the intrigue of this brothers existence. I present to you, the life and times of Independent filmmaker Damon Terry.

First off for those who are not familiar with your work, please tell us a little about your credentials thus far:

Praise the Lord everybody, I am a writer of the Gospel, I write films, I create television shows, I create ringtones, I write stage plays, Greeting cards, and I also write books. I have created over 100 single projects in the last four in a half years. 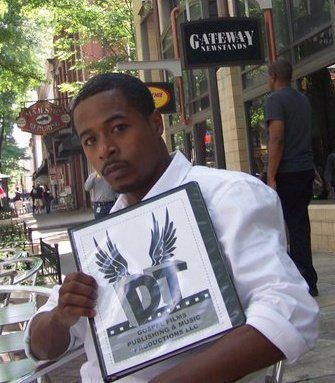 As a director you have been quite successful with the commercials and such mentioned, describe the point where you made the decision to transition to filmmaker?

All the work that the Lord has provided such as the commercials that are listed are all hand written work ready to be pitched. The Lord did not just allow me to write films or stage plays, I have written over 20 commercials. I have not directed any of my own but I have worked on featured films behind the scene and television shows and have been taught by some of the best in the business and paid attention to their craft and learned from them. First featured film I worked with director Jeb Stuart and continued on to work with Jeff Rose and Victor Hobson which I watched and learned a lot of great things from and many, many more. The Lord allowed me around such great individuals to learn this craft and now I am able to direct featured films and short films, television shows and stage plays by myself and with help from a great team. Every great director needs a great team of people to make the production happen.

You own and operate two brands simultaneously correct. What are those brands, and their objective?

I am owner and founder of Let God be The Truth and every Man a Liar Production LLC. My first main objective is to save souls. Second to promote the truth of the Gospel all over the world to present the miracle that was put in me with no knowledge of writing in script format or God these films are going to touch lives there going to make people aware that God is real and no matter what test or trial that you can be victorious over all things it’s a held accountable Gospel the sermon pieces in the movie is the reason why this is a true Gospel film. 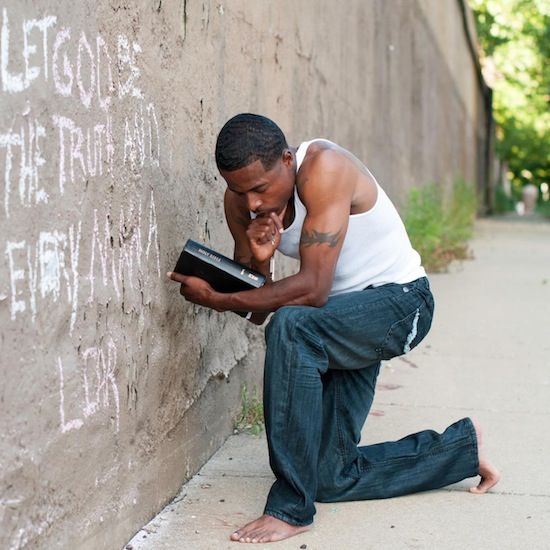 Your core support if you will has been largely in part within the gospel community, how hard is it as a man of great faith and value to make your mark in the entertainment industry, all be it directing but still, an industry where success comes from pushing the envelope with ideas?

Actually the support is quite equal with the Gospel community and the non-Gospel community because a lot of people are aware of the miracle that was put in me and on how I started writing my testimony turns the nonbelievers into believers. I have to endure a lot of test and trials as I am a man of God coming into this entertainment business with four in a half years of knowledge of the business in promoting to the world that this is a miracle from God it’s going to make some people feel some type of way. But the most difficult part about pitching the films to the entertainment business is that a lot of them don’t believe in God. I promote to the world that everything that the Lord has put in me which is a true miracle has never ever been successfully presented to the world before and I can prove it.

Your past is public record of course, and you have been extremely candid in your interviews and more about used to be, and the change that occurred- how did you find your way to the camera?

My past life I was a gangster I sold a lot of drugs from state to state I terrorized coned tricked and deceived a whole lot of people and in December of 2008 I called out to the lord and said I don’t want to live like this anymore and that is when the Lord told me to write a movie and on that night the Lord deposited a dream inside of me then I woke at 4am and I wrote my first film” Practice What You Preach” and I wrote this 13 page script in 13 hours and from there continued writing and still have not stopped. I found my way to the camera by traveling pitching the movie scripts working behind the scenes with other productions learning the craft.

“Practice what you preach” was your first script written correct? What’s the premise behind this screenplay. The cliche is highly utilized but what is unique about your spin on it, which ultimately will be played out on the big screen?

“Practice What you Preach” was the first script that I wrote, and it’s about a preacher that did not practice what he preached a true Gospel drama. You can log onto juntoboxfilms.com and search “Practice What You Preach” and read my 25 minute knock you off your feet screen play book teaser, brace yourselves as you read. And witness the power from the Lord. This is the dream that was put in me. From start to finish. Featured full length industry standard script is also available.

I must commend you on being a self-taught cinematographer; do you catch any flack from not having said the formal training that some of your contemporaries have?

My training comes from the Lord so it’s going to be people that’s not going to support in anything that you do, I’m not self-taught I am God taught so I keep going and not allow others criticism to hinder me.

You are originally from Ohio? What part? So many artists in all genres speak of the obstacle before them by way of living in smaller markets, have you experienced that same tribulation?

I was born in Wood County; Parkersburg, West Virgina. I was raised in Tazewell Virginia and my parents moved me and my siblings to Columbus Ohio in 1991. To be honest I have had the same trials and tribulations making people aware of what I have to present to the world everywhere I go. The Lord has allowed me to travel to a lot of places and it’s a lot of people aware of what I have to offer from the large entertainment companies to the smaller entertainment companies and also a lot of Churches but I keep my faith and keep pushing. That I am taught from Bishop Edgar A. Posey out of Living Faith Apostolic Church in Columbus Ohio that the greater the test and trial the greater the reward. God is not going to put all this in me and not allow it to be successful. Somebody is going to plant the seed to invest the miracle that was put in me to present to the world. And whoever does so will reap 100 fold blessing on good grounds. 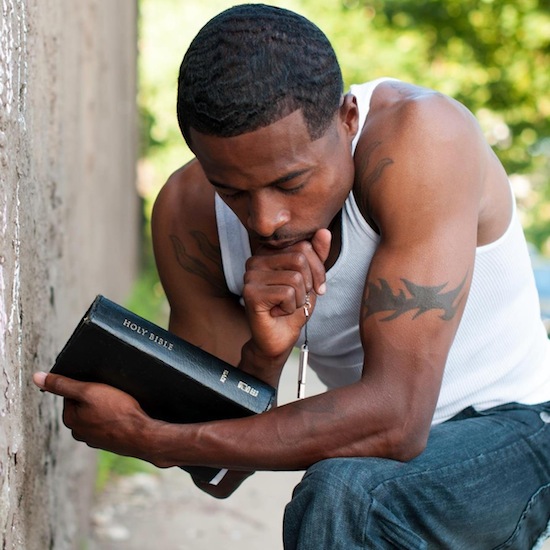 What do you say to those who question the entertainment value in “gospel films” or to those who humor that you are taking pages out of the TD Jakes and Tyler Perry handbook?

A Damon Terry film is a true Gospel drama there is nothing Gospel based about a Damon Terry film everything that is put in me from the Lord a true miracle from the Lord is different there’s nothing old about the Lord all things are new so some people may say that I am something like Tyler Perry or TD jakes but that is not so. Because if my films that are put in me from the Lord were the same as there’s he would not put it in me. People have to understand with the Lord all things are new and I know the scripture says Ecclesiastes chapter 1 verse 9 says That there is no new thing under the sun and that means that the Lord has already done everything, everything is already in place so the Lord will use people that’s going to give him all the praise all the honor all the credit an all the glory to fulfill the ministry all the work that the Lord has put in me is going to change the entertainment industry forever.

Ultimately for the audience what is the message of your screen plays?

The main message in a Damon Terry film that the Bible is the inspired word of God that there’s one Lord one Faith and one baptism and that name of the Lord is Jesus in order to obtain salvation we believe an individual must be born of the water and of the Spirit by being baptize in the name of the Lord Jesus Christ for the remission of sin and being filled with the Holy Ghost with the evidence in speaking in other tongues as the Spirit of God gives the utterance. A Damon Terry film is going to show how people can stay saved while going through test and trials it’s going to show how people that are not of the Lord how to seek the Lord and stay in the walks of Lord. A Damon terry film is going to be a true blessing to the world it’s going to save souls it’s going to give hope it’s going to make people want to plant seeds on good grounds and I’m super excited to present it to the world because it’s going to happen.