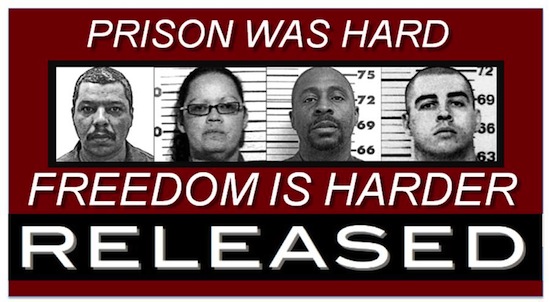 The documentary RELEASED will have its world premiere on Friday, May 10th, 2013 at New York’s QUAD Cinema. Directed by Philip Messina, RELEASED introduces three men and one woman, Vilma Ortiz Donovan, Kenneth Harrigan, Casimiro Torres and Angel Ramos, each a convicted felon, who, attempt to overcome a past and defy the grim statistic that two out of every three prisoners released in the United States today will be back in prison within three years. 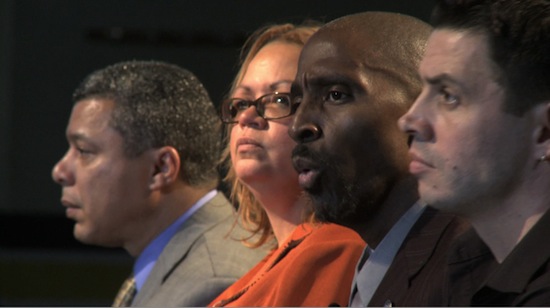 As described by the filmmakers:

Casimiro Torres, grew up in Hell’s Kitchen. “As a kid, I was forced to fight my brother until one of us was bloody — I was bet on like a dog.” Fatherless, with an alcoholic mother he was placed in juvenile facilities where he was abused by a sadistic and sexually deviant staff. Casimiro started using drugs at age 10, becoming a hardened crack-head criminal–burglaries, armed robberies, whatever it took. He was arrested sixty-seven times and did sixteen years in prison.

Vilma Ortiz, a vibrantly intelligent woman from a solid Puerto Rican family, became addicted to cocaine and eventually dealt drugs becoming one of the few women to break into this malicious fraternity where her “status” gave her the illusion of power and confidence, masking profound insecurity and indecisiveness. Finally arrested and convicted, she spent six years in prison.

Kenneth Harrigan, an “A” student from a stable African-American family, started to use recreational drugs and was soon addicted to crack. Burglary sustained his habit–he served 16 years in prison.

Angel Ramos, Puerto Rican, grew up brutally poor with an abusive mother. At seventeen, a friend made an offhanded remark that offended him. Releasing a suppressed reservoir of rage, Angel murdered his friend. He served 30 years in prison.

From these deep deficits, Casimiro, Vilma, Kenneth, and Angel struggled and ultimately triumphed. Drawing on long overlooked personal strengths and a radical shift in attitude they all shared something in common and understood that the will to live productive lives was in their control.

They also shared something else. After leaving prison with no homes to go to and no jobs for support, they found a unique program known as “The Castle”, a 62-bed re-entry facility run by former prisoners in New York City. This haven was created by The Fortune Society, founded by Broadway Press Agent, Producer and activist, David Rothenberg, after years of engagement with former prisoners through talk backs after the performances of his hit play, Fortune and Men’s Eyes.

As part of their rehabilitation Caz, Vilma, Kenneth and Angel collaborated with Rothenberg to tell their own stories. Originally conceived as an exercise in self-awareness, the project developed under Rothenberg into the play, The Castle, and was produced by Eric Krebs, a highly regarded theater producer and social justice advocate, for a 14-month Off-Broadway run in 2008. To date, more than 30,000 people have seen the production in over 200 performances at prisons, colleges, community centers, and other organizations, including the New York State Legislature.