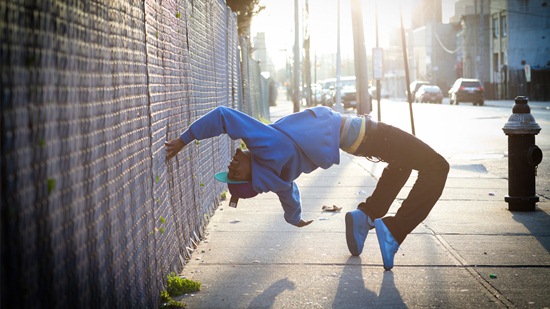 Flex is Kings, a feature documentary by Deirdre Schoo and Michael Beach Nichols, is a charmer of a movie: slick, funny, compelling and awe-inspiring, it’s that rare documentary that manages to be interesting and thought-provoking without leaving its audience depressed.

Flex is an urban dance movement that began in East New York, Brooklyn and has evolved into a kind of dance-off scene in the area organized by the Battlefest League. There aren’t really rules for what a dancer can and can’t do: performers rely on extreme coordination, contortions, and, often, a humorous rapport with their audience (the latter being the specialty of Flizzo, one of the film’s subjects). The scene is strongly evocative of boxing or wrestling: dancers perform in a ring, an MC riles them up before the “battle” begins, beautiful women hold up signs marking the round, and the spectators crowd around the ring, screaming bloody murder. Yet instead of beating each other up, these men are dancing. Artistic expression has trumped pointless violence (though it’s a pity that the movement couldn’t include more women – I can only remember one female dancer, onscreen for no more than a few seconds).

The central question of the film lies in the tension between the desire of nearly all the subjects to “make it” and their clear dedication to their neighborhood. Flex is a product of the streets, and its spontaneity is part of its charm, but in order to “make it” professionally – that is, in the dance world outside of the flex scene – dancers have to learn to rein in that spontaneity, and also adjust to a world dramatically different from the one they’re used to. Jay Dodd, the self-titled inventor of flex and another focus of the film, does manage this feat when a Cobble Hill dance company recruits him to play Pinocchio in a production. Dodd – who has gone on to have a successful dance career – adjusts quickly and successfully, but it’s quite a trip to cut between his rehearsals and his friend Flizzo practicing for Battlefest. They seem worlds apart. That’s the real melancholy of the film, which is otherwise so uplifting: in order to make it, you have to leave your home behind you.