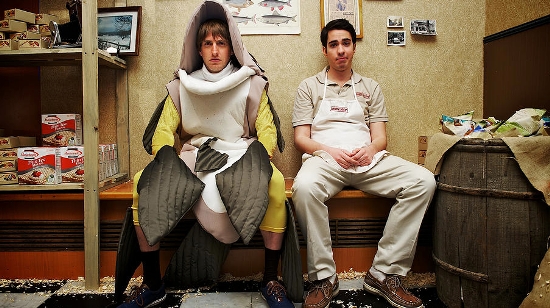 In addition to “Putzel,” the LAJFF will hold LA Premiere screening events for Jonathan Holiff’s “My Father and the Man in Black” about Johnny Cash and his Jewish manager Sid Holiff, and “Roman Polanski, A Memoir” the documentary that screened at Cannes;  the US premiere of the BBC documentary, “Neil Diamond:Solitary Man” ; and the closing night film –  the World premiere of “When Comedy Went To School”  When Comedy Went To School is a documentary about the Jewish stand up comics well known around the world who got their start in the Catskills. The documentary directed by Ron Frank features interviews with Jerry Lewis, Mort Sahl, Jerry Stiller, Jackie Mason and Robert Klein and many others.

Here are the highlighted films

Putzel
LA Premiere  Directed by Jason Chaet  USA / 90 mins / 2012
Stars Melanie Lynskey, Susie Essman, John Pankow and Jack Carpenter. For some, life is an adventure filled with opportunities to excel and places to explore. For Walter Himmelstein, a young man, endearingly known as Putzel, life literally doesn’t go beyond his family’s fish store and his community on the upper west side of Manhattan. In this heartwarming comedy, Walter’s aspirations of taking over his uncle’s smoked fish emporium are disrupted by the arrival of Sally, who becomes romantically involved with his about-to-retire and very-married uncle. While Walter tries to thwart their romance in order to ensure his taking over the business, he finds his circumscribed life thrown off kilter, and, after years of being undermined by his family and friends, he finally starts to realize his full potential. With Sally’s help, Walter confronts his fears and proves he is more than a Putzel.

LA Premiere
Directed by Paul Saltzman  Canada / 78 mins / 2012
In commemoration of the 50th anniversary of the murder of Medgar Evers
In 1965, 21-year-old Torontonian, Paul Saltzman drove to Mississippi, volunteering as a civil rights worker with the Student Non-Violent Coordinating Committee. He was arrested, spending 10 days in jail. He smuggled letters out of jail to the Toronto Star. Canadian Foreign Affairs requested his release but Saltzman declined. Posted to one of the toughest segregationist towns, Greenwood, he helped disadvantaged sharecroppers register to vote. He was assaulted by a young Klansman. In 2007, Saltzman returned to find the KKK member who had punched him in the head, to explore if individual reconciliation was possible. He found him and a 5 year dialogue has ensued. His assailant was, Byron de la Beckwith Jr., whose father, Byron de la Beckwith Sr. murdered NAACP Field Secretary Medgar Evers.

Road Angel
Directed by Steve Lainer  Israel / 15 mins / 2012
On his way to a village to find those responsible for the murder of his son, Moshik encounters an abandoned baby and simultaneously meets Manar, a troubled young Arabic woman. Could this chance meeting change their lives forever?

Beyond Right and Wrong: Stories of Justice and Forgiveness

Directed by Roger Spottiswoode and Lekha Singh
USA/81 mins/2012
‘Beyond Right and Wrong’ explores the journeys of the daughter of a man killed in a terrorist bombing in Great Britain, a mother whose five children were murdered in the genocide in Rwanda, and a father whose daughter is killed by a suicide bomber in Israel.

LA Premiere Directed by Maria Peters
The Netherlands /132 mins / 2011 Dutch with English Subtitles
Official Selection to the 2012 Academy Awards.
From the Netherlands comes an emotional drama about forbidden romance, Nazi brutality, and wartime courage. Adapted by director Maria Peters from a bestseller by Annejet van der Zihl, this is the unlikely tale of Rika (Ricky Koole), a middle-class Dutch wife and mother of four, and Waldemar (Sergio Hasselbaink), a black immigrant from Surinam who’s 17 years her junior. Against all the odds—and under the pitiless gaze of stern, prewar Dutch society—they fall in love, have a child out of wedlock (the titular Sonny Boy), and try to navigate the terrors of World War II in occupied Holland.

Neil Diamond: Solitary Man
Directed by Mark Cooper, Produced by Samantha Peters  UK / 60 mins / 2011
A 60-minute documentary including an interview and exclusive location filming with Neil Diamond in New York and Los Angeles. Interviews with Robbie Robertson, Neil Sedaka, Jeff Barry, Mickey Dolenz and other contributors track Neil from his childhood in Brooklyn to his early days in the Brill Building, his nascent solo career and superstardom in the early 70s, the lean years of the 80s, his career reboot via Rick Rubin in the nineties and his Glastonbury success.

The Netherlands/Belgium / 90 mins
Dutch/French with English Subtitles
The journey from childhood to adulthood is fraught with highs and lows, and it’s no different for thirteen-year-old Amnon Feierberg (or “Nono,” as he’s nicknamed), despite the fact that he’s the son of the world’s greatest police inspector. Adapting the beloved book by acclaimed Israeli writer David Grossman, Flemish writer-director Vincent Bal has created a witty, spirited and action-packed adventure.

My Father and the Man in Black

LA Premiere
Directed by Jonathan Holiff  Canada / 90 mins / 2012
An intense personal adventure with universal themes that just happens to feature on of 20th-century music’s greatest icons, ‘My Father and The Man In Black’ presents the untold story of ‘bad boy’ Johnny Cash, his talented but troubled manager, Saul Holiff, and a son searching for clues to his father’s suicide in the shadow of a legend.

“Lunch”
Directed by Donna Kantor  USA /78 mins /2012
For the past 40 years, a group of writers and directors has been meeting for lunch every other Wednesday. The members and their meeting places have changed over the years, but their appetites for the ties that nourish their friendships have remained. Lunch goes beyond a single meal, and into the lives and successes of each comedy legend. Starring: Sid Caesar, Carl Reiner, Monty Hall, Arthur Hiller, Rocky Kalish, Hal Kanter, Arthur Marx, Gary Owens, John Rappaport, Matty Simmons and Ben Starr.

Directed by Daniel Burman
Comedy / Argentina / 113 mins /2012
Spanish with English Subtitles
Starring Norma Alendro, Luis Brandoni, Valeria Bertuccelli, Jorge Drexler and Silvina Bosco.
Drexler plays Uriel, a divorced dad who enters the picture in his doctor’s office, declaring it’s time to get a vasectomy so he can enjoy his bachelorhood with peace of mind. A hustler who’s always looking for special deals (and cheerfully lies to get them), he’s disconcertingly dishonest with his children as well, despite appearing to love them. While on a gambling vacation, poker fan Uriel stumbles across his world weary ex-girlfriend Gloria (Valeria Bertuccelli), newly single and ready to be convinced she should give him another chance.

Reporting on the NY Times
Directed by Emily Harrold  USA / 17 mins / 2012
Inspired by Laurel Leff’s award winning book Buried by The Times, this film explores how The New York Times handled reports of The Holocaust during World War II. It also explores why The Times, a Jewish owned newspaper, buried more than one thousand articles in its back pages. Was it simply an oversight? Or did the publishers and editors fear an American Antisemitic backlash? Though interviews and testimony of a Holocaust survivor, historians, journalists, and American citizens who lived through World War II, Reporting on The Times encourages audiences to reevaluate America’s place at The Great Liberator. The film also asks viewers to consider the power of the press in creating change.

Two Who Dared: The Sharp’s War

West Coast Premiere
Directed by Artemis Joukowsky
USA / 76 mins / 2012
TWO WHO DARED: THE SHARPS’ WAR is the never before told story of Waitstill and Martha Sharp, an American minister and his wife who boldly committed to a life-threatening mission in Europe to help save imperiled Jews and refugees at the onset of World War II.

Becoming Henry
LA Premiere
Produced by Stephanie Silverman Houser  USA / 9 mins / 2012
A short film based on a true story from the book, An Unbroken Chain: My Journey though the Nazi Holocaust by Henry A. Oertelt. A German immigrant is questioned during a cocktail party in Minnesota regarding his whereabouts during World War II…and discovers that the world can be a very small place.

Roman Polanski: A Memoir
Directed by Laurent Bouzereau  United Kingdom / 90 mins / 2012  Actor, director, Krakow Ghetto survivor, American fugitive — filmmaker Roman Polanski addresses every aspect of his celebrated, tragic and scandalous life in this intimate documentary. Interviewed by a long-time friend, Polanski sets the record straight on the 1968 murder of his pregnant wife, Sharon Tate, by the Manson cult, and his 1977 sexual encounter with a 13-year-old girl that led to his exile and, 30 years later, arrest in Switzerland. Clips from such Polanski classics as ROSEMARY’S BABY, CHINATOWN and THE PIANIST connect the Oscar-winner’s anguished past with his artistic achievements, making for the definitive picture of this complex artist.

When Comedy Went to School
US Premere
Directed by Ron Frank
USA/85 mins /2013
The birth of modern stand-up comedy began in the Catskill Mountains – a boot camp for the greatest generation of Jewish-American Comedians. Narrated by Robert Klein; stars Sid Caesar, Larry King, Jerry Lewis, Jerry Stiller, Mort Sahl and others.
When Comedy Went to School is an entertaining portrait of this country’s greatest generation of comedians – the generation that includes the likes of Jerry Lewis, Sid Caesar, Jackie Mason, Mort Sahl, and Jerry Stiller, all of whom make appearances in the film, telling jokes and telling their stories. The film also asks the question:  Why are so many comedians Jewish?  The answer is found in New York State’s Catskill Mountains, where Jewish immigrants transformed lush farmland into the world’s largest resort complex of the 20th century.  Those Catskill resorts not only offered a burgeoning Jewish middle class a place to vacation with other Jews, it also provided the setting for a remarkable group of young Jewish-American comedians to hone their craft and become worldwide legends. It was truly When Comedy Went to School.