“THE SELFISH GIANT” from 2013 Cannes Film Festival to Get U.S. Release 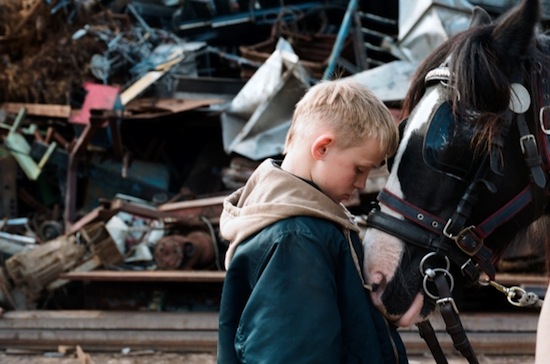 Clio Barnard’s THE SELFISH GIANT which made its world premiere in Directors’ Fortnight at this year’s 2013 Cannes Film Festival will be released in the US by Sundance Selects.

THE SELFISH GIANT, written and directed by Barnard (THE ARBOR), stars Conner Chapman, Shaun Thomas and Sean Gilder, and is described as a contemporary fable about a thirteen-year-old boy named Arbor (Chapman) and his best friend Swifty (Thomas). Excluded from school and outsiders in their own neighborhood, the two boys meet Kitten (Gilder), a local scrapdealer.  They begin collecting scrap metal for him using a horse and cart.  Swifty has a natural gift with horses while Arbor emulates Kitten – keen to impress him and make some money.  However, Kitten begins to favor Swifty, leaving Arbor feeling hurt and excluded, driving a wedge between the boys.  Tensions build, leading to a tragic event, which transforms them all.

This marks the third film from Cannes Film Festival that Sundance Selects will release in the U.S., including writer-director François Ozon’s Competition title YOUNG & BEAUTIFUL with a star-making turn from actress Marine Vacth and Abdellatif Kechiche’s BLUE IS THE WARMEST COLOR, also playing in the Competition section