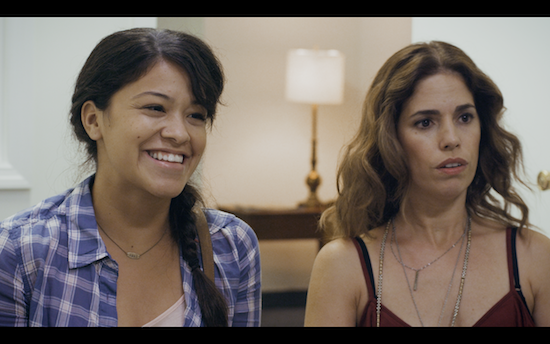 Nicole Gomez Fisher is the writer and director of SLEEPING WITH THE FISHES, an official selection of the 2013 Brooklyn Film Festival.  SLEEPING WITH THE FISHES which had its World Premiere at the festival last weekend, continues to screen to sold out audiences for all of the film’s time slots. SLEEPING WITH THE FISHES is a comedy which captures one girl’s journey of self-discovery and the dynamics of her zany family. The film features an incredible Latino cast of established and rising talent including Gina Rodriguez and Ana Ortiz.

We caught up with the super talented actress, writer, director, Nicole Gomez Fisher at the 2013 Brooklyn Film Festival to find out all there is to know about the hot ticket at the festival and what she is up to next.

VIMOOZ: First, congratulations on SLEEPING WITH THE FISHES being an official selection in the 2013 Brooklyn Film Festival … and the World Premiere. How does it feel doing all this in your hometown Brooklyn?

Nicole Gomez Fisher: It’s exhilarating! The whole process has been so overwhelming, that having the support of friends and family close by only helps get you through. Nothing like home! 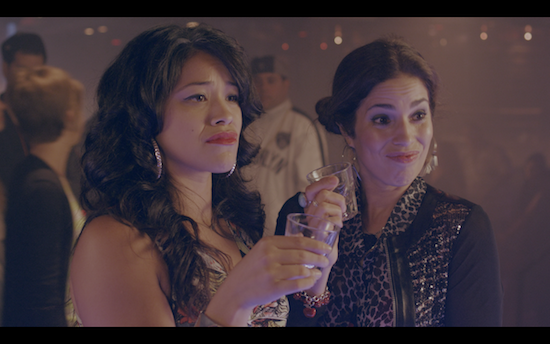 VIMOOZ: Tell us about SLEEPING WITH THE FISHES – the story?

Nicole Gomez Fisher: SLEEPING WITH THE FISHES is about Alexis Fish’s (GINA RODRIGUEZ) journey back home to where it all went wrong, to face her uber-judegmental mother and reveal to her family that her perfect life with the perfect husband wasn’t so perfect after all. It’s a coming-of-age later in life comedy which captures Alexis’ roller coaster world as she tries to pick up the pieces of her life and put them back together under the critical eye of her Madre.

VIMOOZ: Is the film set in Brooklyn?

Nicole Gomez Fisher: Yes it is. They say write what you know…I say shoot where you know. It would stink to have to Mapquest your way around your shoot, especially for your crew and talent! That’s a sure way to lose a team! Brooklyn is amazing! It’s where my heart is. I wouldn’t have shot it anywhere else.

VIMOOZ: You also wrote the film, what was your inspiration?

Nicole Gomez Fisher: My family. The characters are all loosely based on my family and I wanted to write a mother/daughter story that came from a voice not heard very often in Hollywood. I enjoy films that have the perfect blend of humor and heart and I felt that this story embodied both.

VIMOOZ: You have a very impressive writing resume. Was writing for a film different from your prior writing experiences?

Nicole Gomez Fisher: Writing for film versus any other medium, for me, is quite daunting at first. It’s like building a tower of the unknown. Structure is so important and without that set in place, moving forward is futile. I’m great with story and character development, but again, without structure, you’re just flying blind. But once you manage to reach the top, it’s the most rewarding feeling ever.

VIMOOZ: You also have a lot of acting credits and experience. Are you done with acting?

Nicole Gomez Fisher: I prefer being behind the scenes, but if someone offered me a role that required kissing Ryan Gosling…I wouldn’t pass on it. Seriously, I’d jump back on that pony if the right opportunity presented itself.

VIMOOZ: The film is sold out at the festival, how will unlucky film lovers get to the see the film? What’s up next for SLEEPING WITH THE FISHES?

Nicole Gomez Fisher: We are screening again in August at the San Francisco Jewish Film Festival and after that, we are hoping to either screen at the Hamptons Film Festival or Woodstock, but we have to get accepted first! The goal is to sell the film so that those “unlucky film lovers” can have the opportunity to see it on the big screen in multiple cities!

Nicole Gomez Fisher: I recently completed my second feature, an action comedy entitled Good Egg about an egg donor that gets stalked by her recipient and I was just offered to adapt The Yankee Princess by Jennie Paul.