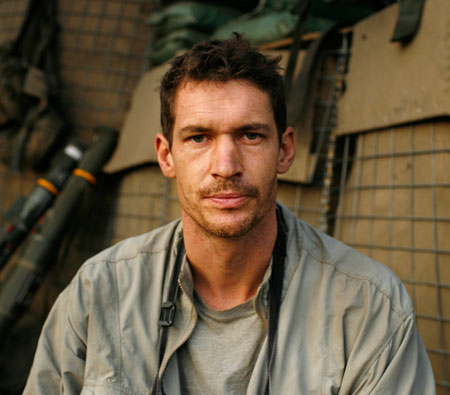 The Human Rights Watch Film Festival returns to New York from June 13 to 23, 2013 at the Film Society of Lincoln Center and the IFC Center. Eighteen documentaries and two fiction films will be featured, including 15 New York premieres.  The festival kicks off on June 13 with the HBO documentary Which Way Is the Front Line From Here? The Life and Time of Tim Hetherington.

Traditional values and human rights is one of four themes for this year’s festival — incorporating women’s rights, disability rights and lesbian, gay, bisexual, and transgender (LGBT) rights. The other themes are crises and migration; a focus on Asia; and human rights in the United States.

The festival will launch on June 13 with a fundraising Benefit Night for Human Rights Watch featuring the HBO documentary Which Way Is the Front Line From Here? The Life and Time of Tim Hetherington. The film is Sebastian Junger’s moving tribute to his lost friend and Restrepo co-director, the photojournalist and filmmaker Tim Hetherington, who was killed while covering the Libyan civil war in 2011. The main program will kick off onJune 14 with the Opening Night presentation of Oscar-winning filmmaker Freida Mock’sANITA, in which Anita Hill looks back at the powerful testimony she gave against Supreme Court nominee Clarence Thomas and its impact on the broader discussion of gender inequality in America. The Closing Night screening on June 23 will be Jeremy Teicher’s award-winning drama Tall As the Baobab Tree, the touching story of a teenage girl who tries to rescue her younger sister from an arranged marriage in rural Senegal.

Traditional Values and Human Rights: Women’s Rights
Traditional values are often cited as an excuse to undermine human rights. In addition toTall As the Baobab Tree, five documentaries in this year’s festival consider the impact on women. Veteran documentarian Kim Longinotto’s Salma is the remarkable story of a South Indian Muslim woman who endured a 25-year confinement and forced marriage by her own family before achieving national renown as the most famous female poet in the Tamil language. Jehane Noujaim and Mona Eldaief’s Rafea: Solar Mama profiles an illiterate Bedouin woman from Jordan who gets the chance to be educated in solar engineering but has to overcome her husband’s resistance. In Karima Zoubir’s intimately observed Camera/Woman, a Moroccan divorcée supports her family by documenting wedding parties while navigating her own series of heartaches. It will be shown with Rokhsareh Ghaem Maghami’s Going Up the Stairs, a charming portrait of a traditional Iranian grandmother who discovers her love of painting late in life and is invited to exhibit her work in Paris. Mike Lerner and Maxim Pozdorovkin’s candid HBO documentary Pussy Riot – A Punk Prayer centers on the women of the radical-feminist punk group, two of whom are currently serving time in a Russian prison for their acts of defiance against the government.

Traditional Values and Human Rights: Lesbian, Gay, Bisexual, and Transgender (LGBT) Rights
Three films in the program remind viewers that, despite recent strides toward equality, LGBT communities around the world still struggle for acceptance. Shaun Kadlec and Deb Tullmann’s Born This Way is an intimate look at the lives of four young gay men and lesbians in Cameroon, where there are more arrests for homosexuality than in any other country in the world. Yoruba Richen’s The New Black uncovers the complicated and often combative intersection of the African-American and LGBT civil rights movements, with a particular focus on homophobia in the black church. In Srdjan Dragojevic’s drama The Parade, a fight by activists to stage a Gay Pride parade in Belgrade leads to an unlikely alliance in a black-humored look at contemporary Serbia.

Traditional Values and Human Rights: Disability Rights
Harry Freeland’s In the Shadow of the Sun is an unforgettable study in courage, telling the story of two albino men who attempt to follow their dreams in the face of prejudice and fear in Tanzania.

Crises and Migration
Three documentaries highlight the issues of humanitarian aid, conflict and migration. In the Festival Centerpiece, Fatal Assistance, the acclaimed director Raoul Peck, Haiti’s former culture minister, takes us on a two-year journey following the 2010 earthquake and looks at the damage done by international aid agencies whose well-meaning but ignorant assumptions turned a nightmare into an unsolvable tragedy. Danish journalist Nagieb Khaja’s My Afghanistan – Life in the Forbidden Zone shows ordinary Afghans in war-torn Helmand who were provided with hi-res camera phones to record their daily lives, giving a voice to those frequently ignored by the Western media. Marco Williams’ The Undocumented is an unvarnished account of the thousands of Mexican migrants who have died in recent years while trying to cross Arizona’s unforgiving Sonora Desert in search of a better life in the United States.

Focus on Asia
The festival will screen two important documentaries from Asia. In Joshua Oppenheimer’s chilling and inventive The Act of Killing, the unrepentant former members of Indonesian death squads are challenged to reenact some of their many murders in the style of the American movies they love. Marc Wiese’s Camp 14 – Total Control Zone tells the powerful story of Shin Dong-Huyk, who spent the first two decades of his life behind the barbed wire of a North Korean labor camp before his dramatic escape led him into an outside world he had never known. Wiese is the recipient of the festival’s annual Nestor Almendros Awardfor courage in filmmaking for his film.

Human Rights in the United States
Four American documentaries — including festival opener ANITA — highlight human rights issues in our own back yard. 99% – The Occupy Wall Street Collaborative Filmgoes behind the scenes of the 2011 movement, digging into big-picture issues as organizers, participants and critics reveal what happened and why. Al Reinert’s An Unreal Dream: The Michael Morton Story tells the story of a Texas man who was wrongfully convicted of his wife’s murder and was exonerated by new DNA evidence after nearly 25 years behind bars. Lisa Biagiotti’s deepsouth is an evocative exploration of the rise in HIV in the rural American south, a region where poverty, a broken health system and a culture of denial force those affected to create their own solutions to survive.