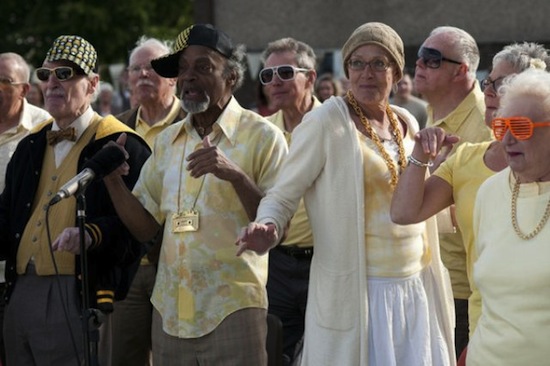 Thank goodness UNFINISHED SONG (titled “Song for Marion” overseas) was made by an English filmmaker. I say that because Hollywood would have completely destroyed this wonderful story by overfilling it with cheesy, contrived moments. Hollywood doesn’t have the guts to make this kind of film without a “star.” Instead of the wonderful performances from Terrence Stamp and Vanessa Redgrave we’d likely get Steve Martin in one of his less-than-great performances and Cher.

But thankfully writer/director Paul Andrew Williams made this movie on English soil. UNFINISHED SONG stars Stamp and Redgrave as Arthur and Marion, an elderly couple who is trying to cope with Marion’s cancer. Marion spends her final months as a member of a neighborhood senior citizen choral group that performs outside the box music (like the B-52s and, to my surprise, Motörhead). Grumpy Arthur doesn’t cope quite as well, and he doesn’t get Marion’s singing though it’s not much different from his old man pub domino games. Even worse, Arthur is concerned that all the energy Marion puts into performing is taking a toll on her health, and it’s also clear that Arthur is jealous of the joy Marion gets out of singing because he doesn’t believe he is capable of making her that happy anymore. Add that to Arthur’s uncomfortable relationship with his son James (Christopher Eccleston) and his resentment of Marion’s choir teacher, Elizabeth (Gemma Arterton), and Arthur has to do a lot of emotional growth for someone his age. 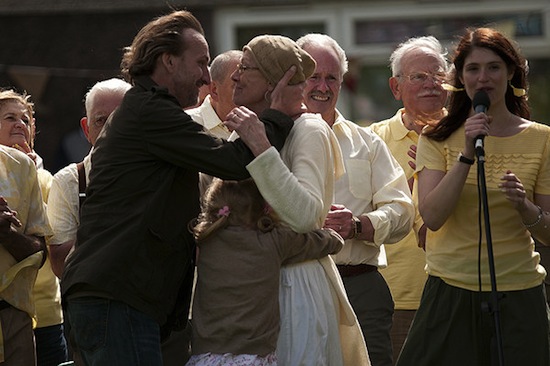 Again, the movie is wonderfully English, and I’m not just talking about Arterton’s familiar cute cockney accent. Despite the harrowing material, it is at its heart a comedy. Stamp brings such a presence to the film, and because of his career-long stern persona the tender moments hit harder than one would expect. This is equaled by Redgrave’s powerful performance as a cancer-stricken woman who won’t give up on life. The two have wonderful chemistry. And I never expected to enjoy senior citizens singing 1990s rap songs as much as I did. Along with that, Arterton really needs to be doing more movies like Unfinished Song and not Prince of Persia or Hansel & Gretel.

Is the material cliché? Is it overly sentimental? Sure. But most of us have hearts, don’t we? Unfinished song presents a sweet story that never seems manipulative, which is harder to find in movies like this than you think. While one might question some of the logic (I refuse to believe Arterton’s character is a woman who has trouble finding dates), you can’t deny the sincerity. Though Unfinished Song isn’t a movie for everyone – I can’t imagine many teenagers connecting with it – it is one that others will find hard not to love.