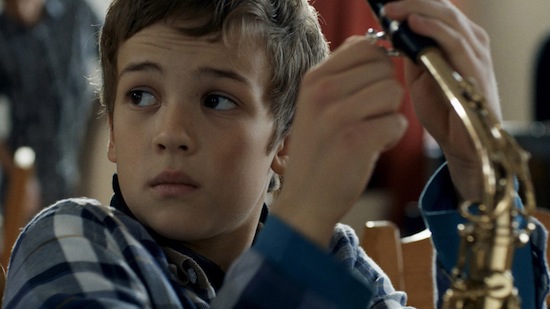 MOTHER, I LOVE YOU

The Los Angeles Film Festival announced the jury and audience award winners for the 2013 Festival;  the top awards –  the DIRECTV Narrative Award went to Janis Nords for MOTHER, I LOVE YOU, which made its United States premiere at the Festival; and the DIRECTV Documentary Award went to Ryan McGarry for CODE BLACK, which made its world premiere at the Festival.

Film Description: Like a lot of children, 12-year-old Raimonds has his quiet side, his talented side (he plays saxophone at a music school), a mischievous streak and a resourcefulness born of desperation. Often on his own while his single mom works, and routinely at odds with her when they do spend time together, Raimonds finds thrilling companionship in Peteris, a boy who steals money from one of the apartments his mother cleans. Raimond’s increasingly dangerous decisions will have thorny repercussions for him and those close to him. Latvia

The Narrative Award carries an unrestricted cash prize of $10,000 funded by DIRECTV, offering the financial means to help filmmakers transfer their vision to the screen. The award recognizes the finest narrative film in competition and is given to the director. A special jury selects the winner, and all narrative feature-length films screening in the Narrative Competition section were eligible.

In bestowing Janis Nords with the DIRECTV Narrative Award, the Jury stated:

“As filmmakers ourselves we are finely attuned to the processes of making a film and sometimes find it difficult not to analyze a film on a purely technical or esoteric level.  In the case of our selected film, we found ourselves absorbed so completely in its world that we removed our critical eye. Its story is simple, deftly executed, and features a prodigious central performance. The careful escalation of dramatic tension, the truthful portrayal of a strained mother-son relationship, the stunning night time photography of an urban landscape and the confidant direction – never sacrificing substance for style – thoroughly won us over.  It is with a deep appreciation for its delicacy, emotional resonance and assured control of craft that we award the Grand Prize to Mother, I Love You.” 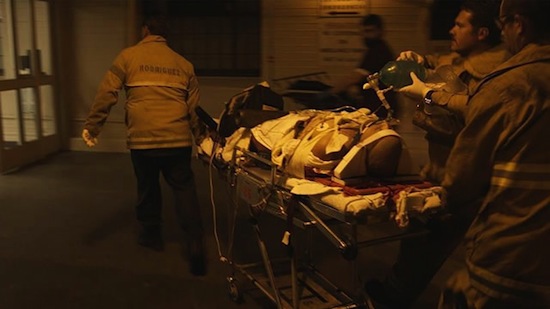 Film Description: Continually understaffed, under-budgeted and overrun with patients, public hospital ER waiting rooms are by definition seas of misery. The ER of the old L.A. County Hospital+USC Medical Center, which was the first academic Department of Emergency Medicine in the US was, by all accounts, a war zone.

Code Black follows a team of young, idealistic and energetic ER doctors during the transition from the old to the new L.A. County as they try to avoid burnout and improve patient care. Why do they persist, despite being under siege by rules, regulations and paperwork? As one doctor simply states, “More people have died on that square footage than any other location in the United States. On a brighter note, more people have been saved than in any other square footage in the United States.”

The Documentary Award carries an unrestricted cash prize of $10,000 funded by DIRECTV, offering the financial means to help filmmakers transfer their vision to the screen. The award recognizes the finest documentary film in competition, and is given to the director. A special jury selects the winner, and all documentary feature-length films screening in the Documentary Competition section were eligible.

In bestowing Ryan McGarry with the DIRECTV Documentary Award, the Jury stated:

“It’s unusual for a first-time filmmaker to integrate complex, multifaceted ideas so seamlessly into a visceral, action-packed and character-driven story that they end up creeping up on you, as if you’d thought of them all by yourself. With a strong point-of-view rooted in personal experience, and without judgment, this year’s winning film deftly disarms a hot-button political issue by reframing it as a human issue and shows us, instead of telling us, why we should care. Instead of rehashing familiar arguments, it drills down to find the universal in the specific. It’s heart warming, and also heart stopping. The winner of the 2013 Los Angeles Film Festival Documentary Competition Grand Jury Prize isCode Black directed by Ryan McGarry.”

Best Performance in the Narrative Competition

Film Description: The feature directorial debut from Indian filmmaker Kamal K.M. may be called I.D., but this drama has less to do with individual identity than it does our shared personal connection. A carefree young woman living in Mumbai named Charu is visited by a painter who’s been hired to do a touch-up to one of her apartment walls. But when the man falls unconscious, Charu discovers that she alone must attend to this stranger, first getting him to the hospital and then trying to discover who he is. India

In bestowing Geetanjali Thapa with the Best Performance Award, the Jury stated:

“The Narrative Competition Jury gives an award for Best Actor to the very talented Geetanjali Thapa for her portrayal of Chara in Kamal K.M.’s I.D. Thapa’s performance is recognized in part for her ability to win over the audience’s empathy for a character that initially lacks, indeed even resists, empathy. Rarely conversational, her ability to speak volumes with gesture and silence is a revelation to the audience. With an onscreen presence that commands attention, we see her rising star as something that excites us as filmmakers, and we are privileged to bear witness to the start of Thapa’s very promising career.”

Film Description: Working with at-risk youth in a foster care facility, Grace never knows when things might suddenly go sideways. Likewise, Destin Daniel Cretton’s film keeps viewers off-balance starting with its brilliantly staged opening scene, rarely allowing a moment’s peace before another crisis erupts. Having reached a critical juncture in her relationship with her boyfriend Grace is pushed to her breaking point by the arrival of Jayden, a girl whose troubled home life parallels the one she endured.

This award is given to the narrative feature audiences liked most as voted by a tabulated rating system. Select narrative feature-length films screening in the following sections were eligible for the Audience Award for Best Narrative Feature: Narrative Competition, International Showcase, Summer Showcase, Community Screenings and The Beyond. 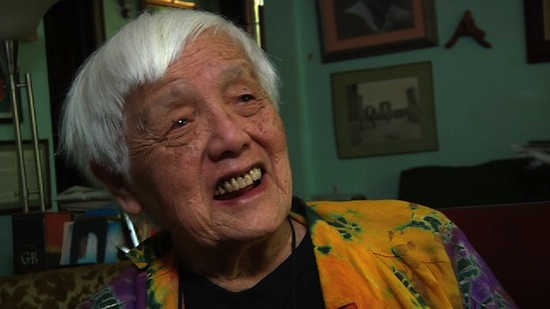 Film Description: Intimate and inspiring, Grace Lee Boggs’ story is one of a lifelong work for social justice and equality. Born into a middle class Chinese immigrant family and educated at Barnard in the 1930s, the young Grace soon noticed the inequities in American society and spent the next eight decades working to change the status quo, becoming an icon of the African American movement. Using her advanced education and intelligence not to accrue vast wealth but to work towards the betterment of all people, Boggs became a true American hero.

At 97 she continues to work tirelessly to educate and activate Americans, young and old, to work for the changes in which they believe. Director Lee (no relation) gives us a writer, activist and philosopher as she works her way through decades of social and political upheaval, inspiring all the way.

This award is given to the documentary feature audiences liked most as voted by a tabulated rating system. Select documentary feature-length films screening in the following sections were eligible for the Audience Award for Best Documentary Feature: Documentary Competition, International Showcase, Summer Showcase and Community Screenings. 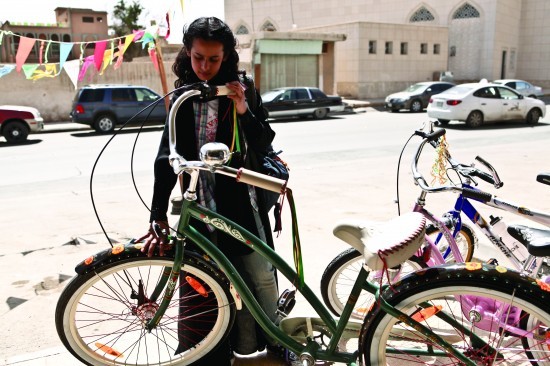 Film Description: This rousing, pioneering gem–not only the first Saudi Arabian feature shot within the Kingdom, but the first ever directed by a woman–focuses on a remarkable 10-year-old girl named Wadjda, who sets her sights on buying a beautiful green bicycle so she can race her friend Abdullah through the suburban streets of Riyadh. But in this conservative society, virtuous girls don’t ride bikes, and her mother forbids it. The rebellious Wadjda decides to raise the money herself – by entering a Koran recitation competition at her school. The troublemaker must pose as a pious, model student to achieve her goal. Germany/Saudi Arabia/United Arab Emirates

Description: In this stunning meditative piece, the walking pace of a monk measures up against the bustling streets of Hong Kong. China

“Great storytelling comes in many different forms, and like an ancient koan, our winner is deceptively simple and surprisingly playful. It features the epic odyssey of one man, seemingly poised against the forces of modernity as he advances – silently, deliberately -from day to night, from tiny alleys to towering skyscraper avenues, across the frenetic city of Hong Kong. At journey’s end, we, too, are transformed by the sweet moment when denial morphs into glee: Walker from Tsai Ming-Liang.”

Description: A real-time documentary of a street hustler running a betting game of finding the ball under one of the three caps.

“Documentaries can expose us to the world’s harsh realities, but they can also reveal the beauty and mystery of the everyday. The latter is very true in the case of our winner for Best Documentary Short, which is only seven minutes long but is filled with character detail and suspense. Consisting of only one shot, this short introduces us to an unnamed street hustler as he bets onlookers that they can’t find the ball hidden underneath one of three caps, our winner is filmmaker Kevin Jerome Everson’s Stone.”

Description: Fleeing a nudist colony where he witnessed his mother’s passing, Willy has an unexpected encounter. Belgium/The Netherlands/ France

“Several of the animated shorts at this year’s festival were inventive and startling, but our winner was a truly exceptional piece of work. This humorous, moving and ultimately sublime short tells a story of life, death and rebirth with wobbly thighs, vomit, breastfeeding, space travel and bunny rabbits – all against the backdrop of a nudist colony. The winner of Best Animated or Experimental Short is Oh Willy…”

Winner: GRANDPA AND ME AND A HELICOPTER TO HEAVEN directed by Åsa Blanck and Johan Palmgren
Producers: Åsa Blanck

Description: An unsentimental young boy goes on a final excursion with his grandfather to collect chanterelle mushrooms. Sweden

Awarded to the short film audiences liked most as voted on by a tabulated rating system. Short films screening in the Shorts Programs or before Narrative Competition, Documentary Competition, or International Showcase feature-length screenings were eligible for the Audience Award for Best Short Film.

This award is given to the music video audiences liked most as voted on by a tabulated rating system.