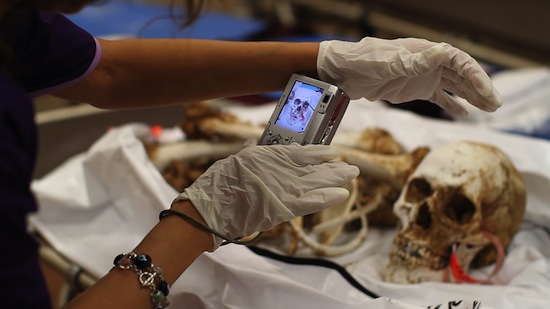 WHO IS DAYANI CRISTAL?

Six film projects have be selected as recipients for the 2013 Tribeca Film Institute (TFI) New Media Fund. The TFI New Media Fund was established in 2011 through a long-term partnership with the Ford Foundation’s  JustFilms Initiative to support non-fiction film projects that go beyond traditional screens, exploring storytelling that is interactive, cross-platform and participatory.

The recipients of grants are:

CHASING THE SUN
Key participants:  Paul Shoebridge, Michael Simons (The Goggles)
Description: Suppose we found a lost continent — impossible, but just imagine an opportunity to do things differently, to do anything besides business as usual. Chasing the Sun is an immersive online story about the Arctic.
Location: Canada: Vancouver, BC

THE YES MEN ARE REVOLTING
Key participants: Andy Bichlbaum, Mike Bonanno, Laura Nix, Mary Notari, The Public Society, Glocal
Description: The Yes Men Are Revolting ends with an urgent call to action—and with a tool, the Action Switchboard, that will help viewers answer that call. This human-moderated digital platform helps a global audience initiate and join direct actions that serve specific activist goals; it also provides training and other resources for carrying out media actions. Effectively, the Action Switchboard invites the film’s audience to join in the story the film and extend it in new and powerful ways.
Location: New York, Los Angeles

WHO IS DAYANI CRISTAL?
Key participants: Gael Garcia Bernal, Marc Silver, Lina Srivastava
Description: Deep in the scorching Sonoran desert beneath a cicada tree border patrol discovers a decomposing body. Lifting a t-shirt, they expose a tattoo that reads ‘Dayani Cristal.’ An anonymous body in the Arizona desert sparks the beginning of a search across a continent to seek out the people left behind and the meaning of a mysterious tattoo. “Who Is Dayani Cristal?” is a film and cross-platform exploration of stories underlying poverty, immigration, and the human rights of migrants who make journey across the US-Mexico border.|
Location: Mexico: Mexico City, UK: London, United States: New York