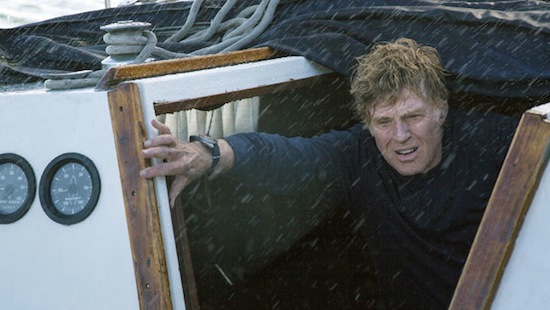 ALL IS LOST directed by JC Chandor, starring Robert Redford

The Melbourne International Film Festival announced the full list of films to screen at the upcoming festival scheduled to run from 25 July – 11 August, 2013. As announced earlier, the festival will open with Pedro Almodóvar’s I’M SO EXCITED!; and the festival will close with the Australian Premiere of ALL IS LOST – JC Chandor’s follow-up to the Oscar nominated Margin Call sees Robert Redford shine in his most physically demanding, powerful performance ever. This year the Festival is marking its halfway point with a special world premiere Centerpiece Gala screening of Tim Winton’s THE TURNING, a film adaptation of Tim Winton’s bestselling novel The Turning, which consists of 17 chapters – each featuring a different director and cast.

The Australian Showcase section will feature homegrown filmmaking including the world premiere of three MIFF Premiere Fund-supported films: These Final Hours, the feature film debut of writer/director Zak Hilditch, featuring a fresh, local take on the apocalypse subgenre with a cast that includes Nathan Phillips (Wolf Creek); MIFF Accelerator Alumni Rhys Graham’s (Words from the City, MIFF 07) Galore, in which four teens navigate the flashpoint of adolescent relationships; and documentary In Bob We Trust, directed by Lynn-Maree Milburn (Autoluminescent: Rowland S Howard, MIFF 11), which goes behind the scenes with controversial Catholic provocateur Father Bob, documenting one of the most turbulent times in his career: his forced retirement and eviction from the church he called home for 38 years.

Other Australian films include Red Obsession which charts the modern fortunes of Bordeaux’s most famous export; Mystery Road in which Ivan Sen, as scriptwriter, editor, cinematographer and director, has created a stunning film, supported by a cast that includes Hugo Weaving, Ryan Kwanten, Jack Thompson and Jack Charles;Fallout the untold story of Nevil Shute’s famed novel On the Beach and the film of the same name; Lygon St – Si Parla Italiano, the true story of Melbourne’s most iconic street, as told by the men and women who made it; one of the few films set and shot in war-ravaged Laos, The Rocket is the debut feature from Australian documentarian Kim Mordaunt; and in Persons of Interest, director Haydn Keenan explores four persons of interest – including Roger Milliss, Michael Hyde, Frank Hardy and Gary Foley – and the allegations contained in their previously secret ASIO files.

This year the Festival presents a new spotlight on Arabic Cinema – From Palestinian Territory, director of the Golden Globe-winning Paradise Now (MIFF 05), Hany Abu-Assad returns with his Un Certain Regard Special Jury Prize-winning take on the Israel–Palestine conflict, Omar; the debut fiction feature from documentary filmmaker Hala Lotfy, Coming Forth by Day is a rare example of independent Egyptian cinema; the first feature ever shot entirely inside Saudi Arabia, by the country’s first female director, Wadjda is a boundary pushing gem; and adapted from Yasmina Khadra’s much-acclaimed book of the same name, The Attack is the heart-wrenching new feature from renowned Lebanese filmmaker Ziad Doueiri.

Returning in 2013, This Sporting Life presents films focusing on incredible athletes from the worlds of tennis, boxing, snowboarding, mountain climbing, surfing, motor sports and martial arts. While most documentaries have focused on Muhammad Ali’s sporting career, Bill Siegel looks at Ali’s toughest bout: his showdown with the American government in The Trials of Muhammad Ali; Uncharted Waters follows Australian Wayne Lynch, “the ultimate soul surfer”, throughout his career; Venus and Serena Williams are not only the most successful sisters in tennis, they’re also amongst the most successful athletes ever – in Maiken Baird and Michelle Major’s revealing documentary Venus and Serena, the siblings’ highs and lows on and off the court are captured over an eventful year. Plus see 1970s Formula One in Weekend of a Champion, a deadly descent from K2 in The Summit, follow three girls at the illustrious Shaolin Tagu Kung Fu School in Dragon Girls plus see firsthand the dangers of snowboarding with Festival guest Kevin Pearce in Lucy Walker’s film The Crash Reel.

From the front lines of Occupy to the Russki rebellions of Pussy Riot, Defying the Times: Activism on Film takes a close eye to the art of resistance and a raised fist in the air to the powers that be. 99% – The Occupy Wall Street Collaborative Film is an expansive, unprecedented documentary that illustrates the motives and consequences of the movement through the collected footage of more than 100 contributors; focusing on the pivotal post-WWII era in British history, The Spirit of ’45, Ken Loach’s first feature length documentary since 1998’s The Flickering Flame, is a timely, unapologetically polemical call to arms for the Labour spirit that engendered an unprecedented period of progressive politics in the UK, which endured until the rise of Margaret Thatcher; and in Powerless, Kanpur, an industrial town of three million-plus in India, is the image of a modern dystopia: crumbling infrastructure, poverty, pollution and rolling power blackouts. This aptly named film documents, in often hair-raising detail, the common Robin Hood practice of power stealing for redistribution, and the futile attempts of the authorities to stop it.

The Documentaries program includes from Karachi, Pakistan, where 10-year-old runaway Omar grapples with the question of home in These Birds Walk and Brazil where we look at their most important artist of the 20th century in the Berlinale Forum FIPRESCI Prize winning Hélio Oiticica, to New York underground filmmaker Beth B’s giddily trashy and confronting look alternative burlesque scene in Exposed and the aid effort following the 2010 Haiti earthquake in Fatal Assistance, documentaries really can take you anywhere.

Now in its third year TeleScope: Visions from the EU, run in conjunction with Festival Scope, offers an outstanding program of celebrated European filmmaking. From a startling and timely film by writer/director Thanos Anastopoulos’ The Daughter, which showcases his fascination with the human cost of Greece’s fiscal catastrophe, to the sophomore feature from Dutch phenom Jaap van Heusden, The New World, a powerful, quietly told vignette of cautious romance and improbable redemption, TeleScope gives an insight into all facets of EU filmmaking.

This year music fanatics of all tastes can feast on our biggest Backbeat ever. Take a glimpse behind the scenes of The National on tour as they are joined by front-man Matt Berninger’s younger brother Tom, a general layabout, as a roadie in Mistaken for Strangers, a mystifying, hilarious and very much improvised investigation of the relationship between these two extremely different brothers. The backup singers who made great songs greater and enhanced the voices of music icons from Mick Jagger to Stevie Wonder step into the limelight in Morgan Neville’s (Troubadours, MIFF 11)Twenty Feet From Stardom. In Artifact, despite being platinum-sellers, Jared Leto’s Thirty Seconds To Mars hadn’t seen a cent of royalties, so they tried to exit their contract. Their label sued them for $30 million. What began as an object lesson from EMI resulted in a David-and-Goliath struggle between a floundering industry and its indentured servants. And from Australia, charting the colourful three-decade history of the Cosmic Psychos and their enigmatic, entertaining front man, Cosmic Psychos: Blokes You Can Trust features interviews with band members and grunge icons, as well as raucous archival footage that captures the unadulterated larrikinism of three beer-swilling Aussies taking on the world.

A perennial favourite, Night Shift offers hardy cinema lovers with a taste for the extreme all the blood-soaked brutality, zombies, reanimated corpses, psychedelic madness and Japanese weirdness they can handle. Sitting at the heart of this ten-film-strong program is MIFF Premiere Fund supported feature Patrick, which will have its world premiere at the Festival. Mark Hartley’s re-imagining of the 1978 Ozploitation classic he celebrated in Not Quite Hollywood (MIFF 08), stars Rachel Griffiths, Sharni Vinson (You’re Next, MIFF 13), Charles Dance (Game of Thrones) and Damon Gameau (Balibo, Save Your Legs!). Also see director Ben Wheatley’s psychedelic trip into magic and madness in A Field in England and Takashi Miike’s Lesson of the Evil – which sees him make a triumphant return to the blood-strewn savagery that made his name.

Accent on Asia showcases the always unique and remarkable films from our region. MIFF regulars bring new wares – legendary actor/filmmaker Takeshi Kitano returns to the crime genre with a film that depicts the yakuza as a dysfunctional business, only with more blood in Outrage Beyond; Jia Zhang-ke (I Wish I Knew, MIFF 11) has built an angry, gritty, beautifully shot drama in A Touch of Sin; Hirokazu Kore-eda’s (I Wish, MIFF 12) Like Father, Like Son delivers a gentle and moving story of personal redemption that playfully navigates its way through the drama; and South Korean Hong Sang-soo (In Another Country, MIFF 12, The Day He Arrives, MIFF 11), gives us his most stripped back yet with Nobody’s Daughter Haewon. MIFF is also pleased to present the Australian Premiere of Accelerator alumnus Anthony Chen Ilo Ilo. Winner of the Cannes Film Festival 2013 Caméra d’Or, this beautifully observed, autobiographical slice of life looks at the conflicts that can emerge between cultures while revealing that some relationship troubles are universal.

Also sitting alongside the Accent on Asia program is a special spotlight on North Korea – Juche Days: North Korea on Film, presented in two different ways; Inside the DPRK take us inside one of the world’s most unfamiliar countries, to present tales from within the DPRK facilitated by Western filmmakers: an extremely rare Western–North Korean co-production, Comrade Kim Goes Flying is a screwball comedy about a young woman pursuing her individual dream in the face of community disapproval; and a revolutionary comedy about the cinematic genius of North Korea’s late Dear Leader Kim Jong-il, the MIFF Premiere Fund supported Aim High in Creation! sees Australian director Anna Broinowski (Forbidden Lie$, MIFF 07) setting out to make a film-within-a-film, based on the rules of his manifesto The Cinema and Directing. Meanwhile, in Juche Showtime: Films of the DPRK, take the opportunity to sample some films from the world’s least seen cinema culture, including Hong Kil Dong, Kim Kil-in’s wire-fighting kung fu epic (which has been told on both sides of the North and South), as well as the high melodrama of Jo-kyong-sun’s A Broad Bellflower.

Taking the art of storytelling where live action can never go, our Animation Showcaseoffers mind-bending, captivating and spooky animated films for adults. Bleakly beautiful and told in silvery animation, Padak is a bittersweet allegory of nihilism and resistance from South Korea; The Apostle, Spain’s first stop-motion feature, is a haunting journey into Gothic folklore; and The Congress Ari Folman’s follow-up to Waltz With Bashir(MIFF 08) is an audacious metaphysical sci-fi satire: part live action, part loony animation overflowing with ideas.

International Panorama features a swathe of titles from Cannes including the feature-length debut from MIFF Accelerator alumnus Kazik Radwanski, Tower; in Mood Indigo, the ever-whimsical Michel Gondry reunites Audrey Tautou and Romain Duris (The Spanish Apartment, MIFF 03) for this adaptation of Boris Vian’s uniquely wondrous cult novel Froth on the Daydream; with bountiful betrayal and abundant bitchiness, Passion is a classic Brian de Palma (Redacted, MIFF 08) psychological thriller; and from award-winning director Reha Erdem (Kosmos, MIFF 10;Times and Winds, MIFF 07) comes Jîn, the story of a young Kurdish rebel who breaks away to find life and solace in the wilderness.

Thriller "A SINGLE SHOT' Gets A U.S. Release Date