WATCH Trailer for “ICEBERG SLIM: PORTRAIT OF A PIMP” in Theaters July 19th 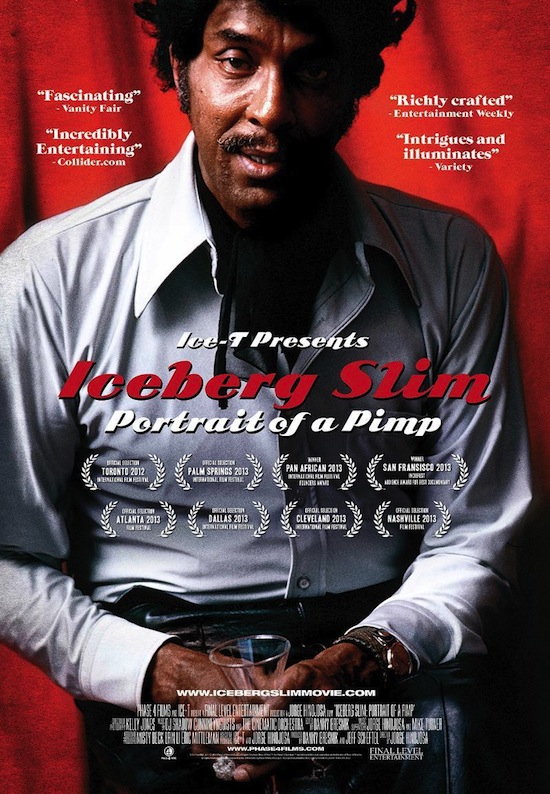 ‘ICEBERG SLIM: PORTRAIT OF A PIMP’, the documentary film about the life of Chicago pimp Iceberg Slim (1918-1992) and how he reinvented himself from pimp to author has a new trailer and release date. The film is scheduled for release on Friday July 19, 2013.

Produced by Ice-T and directed by Ice-T’s long time manager Jorge Hinojosa, comes a documentation based on the life and times of notorious pimp, highly regarded author of seven ground breaking novels. The pen that produced Pimp, Trick Baby, Mama Black Widow, Long White Con, Airtight Willie and Me, Doom Fox, Death Wish: A Story of the Mafia, and The Naked Soul of Ice Berg Slim among others under the urban fiction genre; as the star of Holloway House Publishing the man born Robert Lee Maupin during World War I in Chicago, Iceberg Slim’s novels seemed to always take on an autobiographical tone which was very compelling and attractive to those who could relate to his experiences in the underworld of prostitution, which during those days were a commodity. At the height of his reign he had well over 400 women, what better than a man of his caliber to become the voice for a world which before then had existed in the shadows. In his footstep, other novelists were bred, and millions of copies were sold. Critically acclaimed by the Washington Post, “Iceberg Slim may have done for the pimp what Jean Genet did for the homosexual and thief: articulate the thoughts and feelings of someone who’s been there.” With his work’s translation into languages such as German, French, Italian, Portuguese, Spanish, Dutch, Swedish, Finnish and Greek, Iceberg Slim had become an Urban institution. Before his death in 1992, Iceberg Slim’s catalog had established him as the #2 highest selling African American author to date, second only to the legendary Alex Haley, with even a forray into poetry with the early 70’s release of his collection, Reflections

Including candid interviews, with well know artists, scholars, friends and family alike Iceberg Slim: Portrait of A Pimp seeks to unveil even more of the secrets and flare which made the man, the inspiration to many who have submitted to the intrigue of such a domineering individual. Slated for release Friday July 19th, the film will be available for limited viewing Nationwide, distributed by Phase 4 Films.

WATCH Trailer for "BREAKING THE GIRLS" in Theaters July 26th