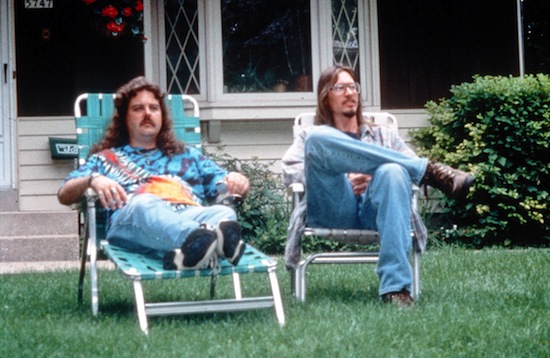 The first-ever NEXT WEEKEND film festival (an extension of the popular NEXT <=> section at the Sundance Film Festival in Park City, Utah) will be held August 8-11, 2013 at venues throughout Los Angeles. The festival will kick off with an outdoor screening of Chris Smith’s cult documentary AMERICAN MOVIE and Mark Borchardt’s horror film COVEN on August 8.

AMERICAN MOVIE (Director: Chris Smith) — Inspired by such films as The Texas Chainsaw Massacre and Night of the Living Dead, Mark Borchardt has been making movies since he was a teenager. He has all the passion and drive it takes; but what he sorely lacks is money. In a questionable business move, he decides to finish and peddle his short film, Coven, in order to finance his dream picture, Northwestern. (Documentary – 107 minutes)

American Movie premiered at the 1999 Sundance Film Festival, where it won the U.S. Grand Jury Prize: Documentary. It was named by the New York Times as one of “The Best 1,000 Movies Ever Made.”

COVEN (Director and screenwriter: Mark Borchardt) — In COVEN – the short film whose production is chronicled inAmerican Movie – an alcohol/drug abuser re-examines his life until he nearly dies from an overdose. Then a friend convinces him to join a self-help group which turns out to be demonic. (36 minutes)

Why Are There No Sequels to Indie Films? Why?