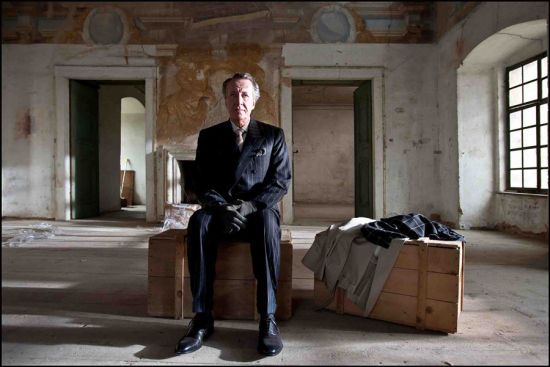 Melbourne will also play host to American rock band, Thirty Seconds to Mars, including acclaimed actor and front man of the band, Jared Leto (Requiem for a Dream). Under the pseudonym Bartholomew Cubbins, Leto directs Artifact, which follows the band as they record their third album, providing an often Spinal Tap-esque insight into the realities of modern music. Also part of the Backbeat program are guests Maureen Gosling, director of This Ain’t No Mouse Music!, which traces one man’s obsession with the American South’s music, and Nathaniel Kohn, producer of Bayou Maharajah: The Tragic Genius of James Booker, an exploration of the life and music of the New Orleans piano legend.

Cannes Best Screenplay winner, director Jia Zhang-ke and actress Zhao Tao, will be in town to present A Touch of Sin, a confronting character-driven tale of modern China and the domestic conflict its newfound wealth has wrought. Accelerator alumnusAnthony Chen will return to Melbourne with this year’s Camera d’Or winner, Ilo Ilo, the stirring tale of a Singaporean family who take in a Filipino woman as a live-in maid. Also fresh from Cannes is the winner of the Un Certain Regard Directing Prize, Alain Guiraudie, with his steamy thriller Stranger by the Lake; and hot on the heels of Cannes, young German filmmaker Katrin Gebbe will be presenting her film Nothing Bad Can Happen, a harrowing tale of a vulnerable young Christian man.

The American contingent is strongly represented this year. Champion snowboarder Kevin Pearce will be in Melbourne to present the SXSW Audience Award-winning film The Crash Reel, which documents the rise and literal fall of his career, which was cut short at age 22 in a near-fatal crash. Also from the This Sporting Life section and jetting in from the US is Michelle Major who will present her directorial debut, Venus and Serena – a fascinating insight into the legendary athletes and sisters, Venus and Serena Williams. From the Next Gen program first-time filmmaker Marta Cunningham will be presenting her affecting documentary Valentine Road, about 14-year-old Brandon McInerney from Oxnard, California, who shot and killed his cross-dressing classmate, Lawrence King. Meanwhile indie filmmaker Matt Porterfield, will be in town to present I Used to be Darker – a striking picture of quotidian family dynamics and revelations which will screen in MIFF’s new spotlight, States of Play: American Independents.

Mark Albiston will be crossing the Tasman with his debut feature Shopping – a coming-of-age drama set in 1981 New Zealand and winner of the Grand Prix of the Generation 14plus International Jury for Best Feature Film at this year’s Berlinale. Also set in New Zealand is Denmark-based director Daniel Joseph Borgman’s debut feature, The Weight of Elephants – a captivating exploration of childhood fragility. Daniel Joseph Borgman will be a guest of the festival and both films will screen in MIFF’s International Panorama program.

Other international guests include: Chilean actress Paulina García, whose standout performance in Gloria won her the prestigious Silver Bear for Best Actress at this year’s Berlinale; Nicholas Bonner, co-director of Comrade Kim Goes Flying – a vivacious romantic comedy and extremely rare Western–North Korean co-production, screening in MIFF’s new spotlight, Juche Days: North Korea on Film; João Pedro Rodrigues and João Rui Guerra da Mata, who co-direct the audacious documentary hybrid The Last Time I Saw Macau, which screens in MIFF’s TeleScope: Visions from the EU program; and Axel Straschnoy, director of Kilpisjärvellä, which presents the Northern Lights as they are experienced by someone watching them from the ground. Kilpisjärvellä will screen as part of the Planetarium Fulldown Showcase, a special program of jaw-dropping fulldome screenings at the Melbourne Planetarium.

Australian thriller Patrick is another film from this year’s MIFF Premiere Fund that will have its world premiere on Saturday 27 July. Director Mark Hartley (Not Quite Hollywood, MIFF ‘08) reinterprets the classic Aussie horror flick and will be attending alongside cast including Rachel Griffiths, Peta Sergeant, Damon Gameau, Jackson Gallagher, Simone Buchanan and producer Antony I. Ginnane. Other Premiere Fund guests include: writer/director Anna Broinowski (Forbidden Lie$, MIFF ‘07) and producer Lizzette Atkins, with the revolutionary film within a film, Aim High in Creation!, based on the creative manifesto by North Korea’s late leader Kim Jong-il; writer/director Rhys Graham (Words from the City, MIFF ‘07), who tells the story of four teens whose lives are forever scarred by tragedy in Galore, will be joined by cast members Lily Sullivan and Maya Stange and producer Philippa Campey; writer/director Lynn-Maree Milburn (Autoluminescent: Roland S Howard, MIFF ‘11), who shines the spotlight on local Catholic provocateur Father Bob Maguire in the documentary In Bob We Trust, will be joined by Father Bob Maguire, producerRichard Lowenstein and cinematographer Andrew de Groot; and writer/director Zak Hilditch, actor Nathan Phillips (Wolf Creek), rising star Angourie Rice and producerLiz Kearney will be in town to present the apocalyptic thriller These Final Hours.

Music lovers are in for a treat with a number of Australian talent attending this year’s festival including local punk rock band Cosmic Psychos and Matt Weston, the director of Cosmic Psychos: Blokes you can Trust, which charts the colourful three-decade history of the group; director Kaye Harrison with The Sunnyboy, a film about rock, redemption and the healing power of getting the band back together one last time; and director Juliet Lamont and documentary subject Nikki May with Miss Nikki and the Tiger Girls, the insightful documentary of Burma’s first girl band.

MIFF’s home-grown contingent of guests continues with legendary surfer Wayne Lynch, the documentary subject of Uncharted Waters by director Craig Griffin, which follows Wayne’s career and the evolutionary influence he had on the sport. Director Kim Mordaunt will be in town to present the multi-award-winning feature, The Rocket, a heart-warming coming of age story set in war-ravaged Laos. Other Australian guests include Lawrence Johnston, director of Fallout about the untold story of Nevil Shute’s famed novel On The Beach and the film of the same name; Award-winning director Ivan Sen (Toomelah, MIFF 11), director of Australian thriller Mystery Road and cast members Aaron Pedersen, Jack Charles and Damian Walshe-Howling; Steve Ostrow, documentary subject of Continental, which explores the notorious venue that sparked a revolution and cemented its place in legend; Haydn Keenan, director of the extraordinary TV series Persons of Interest; Warwick Ross and David Roach, co-directors of Red Obsession which charts the modern fortunes of Bordeaux’s most famous export; Shannon Swan and Angelo Pricolo, co-directors of Lygon Street – Si Parla Italiano, the true story of Melbourne’s most iconic street, as told by the men and women who made it; and from the made-for-ABC-TV Nowhere Boys, by the prolific Matchbox Pictures, director Daina Reid and cast will attend the screening.

The Good, The Bad, and the Horrific: Indie Horror Movies at Film Festivals