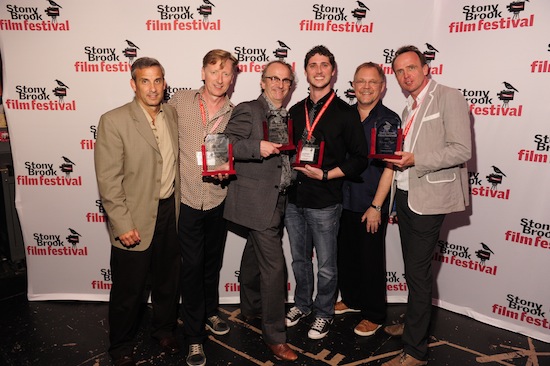 The 18th Annual Stony Brook Film Festival wrapped up on Saturday night with a Closing Night Reception and announced the winners of the 2013 festival. MY BEAUTIFUL COUNTRY written and directed by Michaela Kezele was selected by the jury as the 2013 Jury Award-Best Feature; and the 2013 Audience Choice-Best Feature a tie between ALLEZ, EDDY! written and directed by Gert Embrechts and THE BLITZ directed and co-written by Ate de Jong.

During the civil war in Kosovo, the young Serbian widow Danica takes care of Ramiz, a wounded Kosovo-Albanian soldier on the run from the Serbian militia. She finds him seeking refuge in her home on the Serbian side of the River Ibar. As love slowly blossoms between them, Ramiz begins to make friends with Danica’s two sons, both deeply affected by the recent loss of their father at the hands of Albanians.

ALLEZ, EDDY! is a heart-warming comedy about Freddy, an 11-year old cycling enthusiast with special needs and lots of courage. He is the son of a butcher in an idyllic village, disrupted when the first supermarket opens its doors and sponsors a cycling race as an opening event. The winner of the race will meet world famous cyclist Eddy Merckx. Since the supermarket is the enemy of the local shopkeepers and, in particular, his own father, Freddy is obliged to enter the race in secret.

Set in Rotterdam, May 1940, just days before the Germans bombed citizens of the Netherlands in a surprise attack, The Blitz tells the story of Vincent, a poor, young amateur boxer, and Eve, a young woman from Germany who has agreed to marry a wealthy middle-aged industrialist she does not love in order to save her family.

In this hilarious comedy, Molly and Josh innocently agree to fake a wedding engagement to make Josh’s dying father’s last wish come true. Things quickly get out of hand with their two boisterous families as they pretend to be a couple and start planning a phony wedding. The Stony Brook Film Festival congratulates John Burgess on his excellent direction of One Small Hitch, his first feature film.

As a child, Zurdo shared a special relationship with his grandmother but he has lost contact with her. On the last day of summer, he visits her with the intuition that he might not see her again.

A film from Germany by Christoph Schuler. New York Premiere.

Upon returning home from Germany after a tour of duty in Afghanistan, a soldier tries to adjust to civilian life.

On Friday, July 26, a Career Achievement Award was presented to Christine Vachon of Killer Films, one of the nation’s most esteemed and influential independent film producers. Director Mo Ogrodnik and Pamela Koffler, co-founder of Killer Films, attended the screening of Deep Powder. Vachon’s extraordinary career as a producer includes 70 movies over 20 years (Boys Don’t Cry, Hedwig and the Angry Inch, Happiness, One-Hour Photo, Kids, I Shot Andy Warhol, At Any Price, and virtually all of Todd Haynes’ films). She recently joined the faculty of Stony Brook Southampton and spearheaded 20/20/20, which granted full scholarships to 20 students to make 20 short films in 20 days (July 8-28). The entire class and staff of 20/20/20 students attended the screening of Deep Powder.