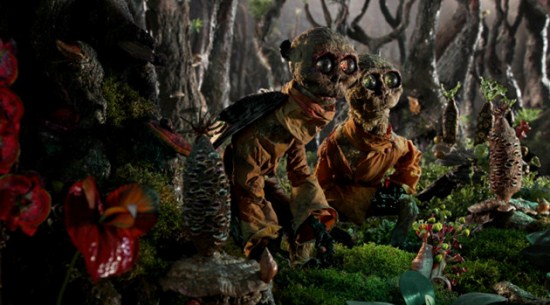 The Toronto International Film Festival revealed the lineup of 39 shorts in this year’s Short Cuts Canada program. Dedicated to presenting the best short films from emerging and established Canadian filmmakers, the lineup includes 15 returning filmmakers and a host of 3D and animated films. New this year, 24 hours after their Festival premiere, films will be available to screen at YouTube.com/TIFF until September 19. The Festival also announced the YouTube Award for Best Canadian Short Film, which includes a $10,000 cash prize. The 38th Toronto International Film Festival runs September 5 to 15, 2013.

A GRAND CANAL Johnny Ma, 19’ World Premiere
A Greek tragedy told in a Chinese pop song. Tragic events of a boat captain trying to collect a debt to save his fleet of boats, as remembered by his 10-year-old son.

A TIME IS A TERRIBLE THING TO WASTE Leslie Supnet, 3’ Toronto Premiere
An animated squirrel ponders the essence of time.

AN EXTRAORDINARY PERSON (Une Personne extraordinaire) Monia Chokri, 30’ North American Premiere
A 30-year-old scholar, intelligent and beautiful yet socially crippled, is forced to attend a bachelorette party where her quest for authenticity leads to an unavoidable confrontation with old acquaintances.

ANATOMY OF ASSISTANCE Cory Bowles, 13’ World Premiere
15-year-old Talia is defiant, refuses the system and thinks she’s got it all figured out. When she challenges the assistance envelope given to her by her school, she’s suddenly thrust into a daisy chain of errors that lead her to face a larger system: growing up.

BEASTS IN THE REAL WORLD Sol Friedman, 8’ World Premiere
An experimental mixed-media short that explores the tenuous connections between a naturalist, a rare land mammal, and a pair of sushi chefs.

CANDY Cassandra Cronenberg, 8’ World Premiere
Cassandra Cronenberg’s experimental short is a convention-busting portrait of human transactions — love, sex, money, art — that takes place over one beautiful, intoxicating night. As Candy wanders through it all, the audience is immersed in a visual poem in which an ocean of light is found in the dark.

COCHEMARE Maciek Szczerbowski and Chris Lavis, 12’ North American Premiere
Blending animation, live action, and stereoscopic 3D, Cochemare is an immersive, tactile, and sensory experience. As the viewer journeys from the mystical Forest of Storms to the orbiting International Space Station, the film forces the audience to confront notions of voyeurism, femininity, and the separation of body and mind.

CRIME: JOE LOYA – THE BEIRUT BANDIT Alix Lambert and Sam Chou, 2’ World Premiere
In his 20s, Loya achieved notoriety as the smooth-talking Beirut Bandit, who robbed dozens of Southern California banks. When the police caught up with him in 1989, they discovered a Mexican-American from East Los Angeles who had once been a promising student. Imprisoned for seven years, he grew more violent until two years of solitary confinement prompted a remarkable self-transformation.

DAYBREAK (Éclat du jour) Ian Lagarde, 11’ World Premiere
In a wealthy Montreal suburb, Xavier and his friends are dealing with pre-teen boredom. They hang out at the park, ride their bikes, and mess with each other; it’s yet another suburban summer afternoon. But beneath the smiles lies a growing tension, a certain violence which leads the group to a collective release of unexpected intensity; a ritualistic initiation into adolescence.

DER UNTERMENSCH Kays Mejri, 9’ World Premiere
Der Untermensch depicts the treatment of homosexuals in concentration camps during the Second World War, through aesthetic contemporary movement. The dancer portrays the work, growth and rebirth of those incarcerated souls by embodying a gay Aryan during the Nazi reign.

DROP Chris Goldade, 12’ World Premiere A World War II paratrooper lands in enemy territory — and right onto a modern-day suburban driveway — where he is confronted by an unemployed freeloader who’s still living in his parent’s house. This dark comedy with an original premise and deadpan performances makes the perils of war uncomfortably funny.

THE END OF PINKY Claire Blanchet, 8’ World Premiere
The End of Pinky revolves around three fallen angels seeking companionship and humanity in the shadows of the red-light district, in a mythic, magically realized Montreal. The film’s hand-drawn pencil and pastel animation, rendered in stereoscopic 3D, conjures a seedy world whose sepia-toned palette evokes cheap whiskey and nicotine stains.

FIRECRACKERS Jasmin Mozaffari, 15’ World Premiere
Lou and Chantal are two shit-disturbers from a town whose only remaining attraction is truck-stop prostitution. Their dreams of escaping are shattered when Lou’s savings are stolen by her mom’s alcoholic boyfriend. With nowhere left to go and nothing left to lose, Lou heads into the night, with a bottle of whiskey in hand and no regrets.

FORECLOSURE Wayne Robinson, 13’ World Premiere
Sigmund is a docile and obedient worker who is given an opportunity of a lifetime when his manager, Mr. Wolfman, assigns him the task of completing a dossier on their company’s profit margin. Upon sitting down to start working however, Sigmund is confronted with his worst nightmare: naked people.

GLORIA VICTORIA Theodore Ushev, 7’ North American Premiere
Gloria Victoria, the third film in a trilogy on the relationship between art and power, unfolds on the still-smouldering rubble of a furious 20th century. From the Russian front to the Chinese Revolution, from Dresden to Guernica, giant black birds circle above mass graves while vampires and reapers move forward to the sounds of an exalting bolero from Shostakovich’s Leningrad Symphony.

IMPROMPTU Bruce Alcock, 10’ World Premiere
When Chuck’s wife spontaneously invites her co-workers home for dinner, the last-minute gathering seems to have all the makings of a disaster — but it leads instead to a quiet epiphany about embracing the chaos of life’s rich pageantry. Impromptu reminds the audience of the redemptive power of food, wine, music and love, as seen through the eyes of a modern man.

IN GUNS WE TRUST Nicolas Lévesque, 12’ North American Premiere
In Kennesaw, a small American town in the state of Georgia, a good citizen is an armed citizen. By law, since 1982, each head of household must own at least one working firearm with ammunition.

JIMBO Ryan Flowers, 25’ World Premiere
Stricken, but not struck down, by a slew of mental illnesses, Jimmy Leung’s drive to become an action movie star becomes something of a reality as he and director Ryan Flowers train to become healthy and stable, and make a movie together.

LAY OVER Jordan Hayes, 13’ World Premiere
A girl meets a boy on an eight-hour layover.

NOAH Walter Woodman and Patrick Cederberg, 17’ World Premiere
In a story that plays out entirely on a teenager’s computer screen, Noah follows its eponymous protagonist as his relationship takes a rapid turn for the worse.

NOUS AVIONS Stéphane Moukarzel, 18’ World Premiere
Montreal, 1999. Like every Sunday, a modest Pakistani immigrant family picnics in a dead end next to the airport, closely watching planes land. On this special day where the Legendary Concord is expected — a rare treat in town — 17-year-old Akram, the eldest son of three kids, who is in his teenage crisis, creates a family commotion when he decides to take off to live his own life.

NUMBERS & FRIENDS Alexander Carson, 7’ World Premiere
In his search for happiness in North America, a European man discovers the pleasures of fantasy baseball. Using his new appreciation for sports as a metaphor to re-imagine his life choices, he begins to find new meaning in the world around him.

OUT Jeremy Lalonde, 9’ World Premiere
A young man comes out to his family. But is he coming out of the closet, or out of the coffin?

PARADISO Devan Scott, 13’ World Premiere
After being sent to heaven as the result of the biblical Armageddon, Cain Tibbons meets Saint Peter, whom he must persuade to help him rescue his brother from hell. However, Cain’s story might not be all it seems.

PILGRIMS Marie Clements, 8’ World Premiere
Robbe, a German tourist, is partaking on a life-long dream of visiting the west coast of Canada. His fantasy of the great Indian culture is one thing, but to be a part of it requires Robbe to undergo a dangerous rite of passage: a journey of self-evaluation.

RELAX, I’M FROM THE FUTURE Luke Higginson, 5’ World Premiere
Percy Sullivan’s suicide attempt gets interrupted by a man claiming to be from the future.

REMEMBER ME (Mémorable moi) Jean-Francois Asselin, 15’ Canadian Premiere
Mathieu seeks any (and every) way to attract attention to himself.

ROLAND Trevor Cornish, 11’ World Premiere
Roland, an employee at Crafty’s Art and Supply, must deal with an irrational man who needs to use the washroom and is confused by the store’s strict employee-only washroom policy. A full bladder and some company red tape has Roland’s day take a dire turn.

SAM’S FORMALWEAR Yael Staav, 15’ World Premiere
Sam Parish, once the high-school prom king, is now the former king of formalwear and ex-husband to his then-prom queen. On the eve of his daughter’s prom, Sam grasps at an opportunity to feel like the king once more, oblivious to the consequences.

SEASICK Eva Cvijanovic, 3’ World Premiere
Seasick is a meditative exploration of one’s love of the sea to the soundtrack of traditional Croatian music.

THE SPARKLING RIVER Felix Lajeunesse and Paul Raphaël, 18’ World Premiere
A group of Chinese travellers have appeared on an alpaca farm, seemingly by accident. A young woman who is among them tries to connect with the farm’s proprietor. The Sparkling River uses 3D-stereoscopy to lure the viewer into a contemplative and dreamlike state. The film explores enduring themes of memory, migration and place.

WE WANTED MORE Stephen Dunn, 15’ World Premiere
A psychological thriller about a singer who loses her voice on the precipice of her first world tour, We Wanted More is a hypnotic fever dream about the sacrifices a young artist makes for her career.

YELLOWHEAD Kevan Funk, 19’ World Premiere
A middle-aged worksite safety inspector defiantly maintains a tireless occupational routine, traversing across Canada’s lonely northern landscape from one expansive industrial operation to the next. As the cracks in his crumbling personal life become more and more apparent, he slips deeper into willful ignorance and denial, providing a striking parallel to the altered physical landscape and exploitative industry that surrounds him.

YOUNG WONDER James Wilkes, 6’ World Premiere
Armed with only the sword of Evil’s Bane, automatic weapons and a bazooka, 8-year-old Sebastian and his 11-year-old brother Chris battle their way through a legion of pop culture menaces en route to getting snacks. Young Wonder combines kinetic and visually stunning storytelling with sincere observations on the nature of boys and play.