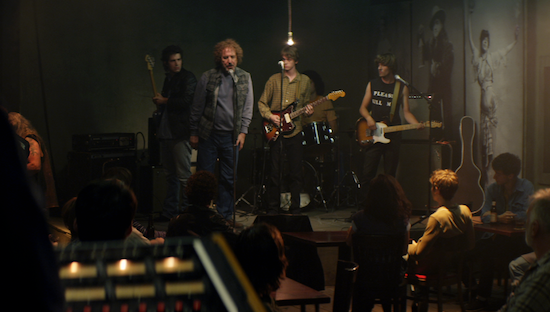 The film “CBGB” will have its US festival premiere at the opening film of this year’s CBGB Music & Film Festival the five-day festival/conference that will take place in New York City from Wednesday, October 9 to Sunday, October 13, 2013. Based on the behind-the-scenes story of the beginnings of the US punk movement, CBGB features a talented ensemble cast channeling the prime movers of the era.

The CBGB Film Festival will premiere an estimated 40 new movie titles, featuring Q&A sessions with directors, producers and/or actors. In addition to CBGB, a number of important music films will also have their worldwide premieres at CBGB Film Festival, including Louder Than Love: The Grand Ballroom Story (directed by Tony D’Annuncio and documenting the Detroit music scene) and Looking For Johnny, The Legend of Johnny Thunders (directed by Danny Garcia about legendary punk guitarist Johnny Thunders of the New York Dolls). “Attending the CBGB Film Festival in New York City in its first year was an honor and a total blast at the same time,” says director Garcia, who makes his second premiere at CBGB Film Festival (last year he debuted the acclaimed The Rise and Fall of The Clash). “I’m really looking forward to returning for this year’s edition.” This year’s festival will bolster its feature film line-up with the addition of short films from around the globe.

An abbreviation for “Country, BlueGrass, and Blues”, CBGB holds a very important place in rock ‘n’ roll history when it began its auspicious origin as a music club on The Bowery in NYC’s East Village. Founded by the late Hilly Kristal in 1973, CBGB became a hotbed for American punk and new music.