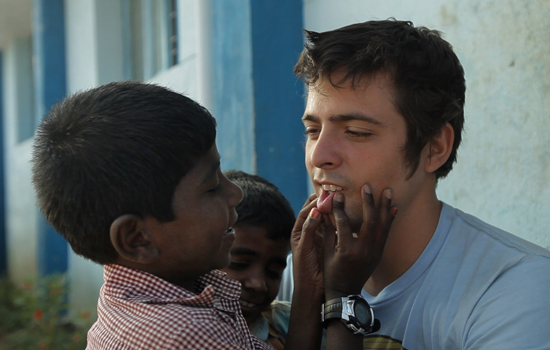 The Daedalus Project, The Oregon Shakespeare Festival’s annual fundraiser to end the spread of HIV/AIDS, will launch its first-ever film festival on August 16-18 at The Varsity Theatre on Main Street in Ashland, Oregon. The Daedalus Film Fest, produced in partnership with the Ashland Independent Film Festival and Coming Attractions Theatres, includes a slate of 5 bold, original, award-winning documentaries about the ongoing global HIV/AIDS crisis.

“For years, we’ve come together as a community to save lives at Daedalus. This Film Fest is a new way for audiences to engage in the conversation about HIV/AIDS and to participate in OSF’s life-saving efforts,” says Daedalus organizer and OSF Company Member Eduardo Placer.

The unmistakable power of love is celebrated in this story of one American’s decision to move to India and restart his life among children living at an orphanage for those infected with HIV.

Originally a stage play with actors from the Nairobi slums, this film combines fiction and documentary as its lively protagonists come to terms with HIV and life in the slums.

An untold corporate crime story of immense proportions about pharmaceutical companies and governments blocking access to low-cost AIDS drugs in Africa and India causing millions of unnecessary deaths – and of the people who decided to fight back.

The story of young activists who created some of the most powerful social movements of our time, saving their own lives and millions more. Their activism and innovation turned AIDS from a death sentence into a manageable condition.

Five individuals who lived in San Francisco during the AIDS epidemic share intensely personal stories that also illuminate the much larger themes of that era and the incredible power of a community coming together with love, compassion, and determination. (View trailer)

“Nearly all of these films are making their first big-screen appearance in the Rogue Valley,” says Joanne Feinberg, Director of Programming at the Ashland Independent Film Festival. “In many cases, we wanted to include these selections in AIFF’s annual festival, but some of these films are only now available. The Daedalus Film Fest presents us with a unique opportunity to share these works with Southern Oregon.”