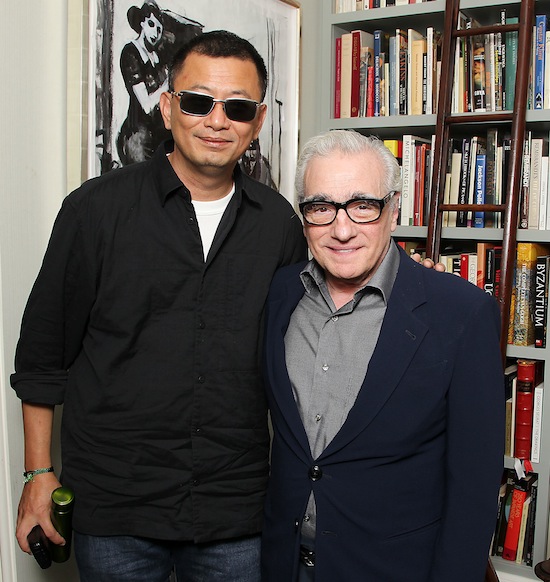 Filmmaking legends Wong Kar Wai and Martin Scorsese met in New York yesterday to celebrate the upcoming release of Wong’s kung fu epic THE GRANDMASTER. The Weinstein Company, who is releasing the film theatrically, recently announced that Scorsese is lending his name in presentation of the picture, deeming it MARTIN SCORSESE PRESENTS ‘THE GRANDMASTER.’ The film, which stars internationally beloved actors Tony Leung, Ziyi Zhang, and Chang Chen and is executive produced by Annapurna Pictures’ Megan Ellison, will open in New York, Los Angeles and Toronto on August 23rd and nationwide on August 30th.

Filmed over the course of 22 months in a range of stunning locations that include the snow-swept landscapes of Northeast China and the subtropical South, the actors underwent several years of rigorous and extremely challenging kung fu training for their roles in the film. Years of research before production and a virtual battalion of martial arts trainers on set ensured that THE GRANDMASTER portrays both the Chinese martial arts and the world of the martial artists with unprecedented authenticity, with fight scenes choreographed by renowned action choreographer Yuen Wo Ping (THE MATRIX, KILL BILL, CROUCHING TIGER, HIDDEN DRAGON.)

Said Scorsese: “Wong Kar Wai has turned martial arts into a modern dance. Every movement hit with precision, every emotion drenched with underlying honor. THE GRANDMASTER, arranged with both elegance and fury, left me mesmerized.”

“Marty has always been a great inspiration,” said Wong Kar Wai. “We are so thankful for his support of the film.”

Commented TWC Co-Chairman Harvey Weinstein: “Marty Scorsese’s reaction to THE GRANDMASTER couldn’t have been more enthusiastic. When Marty champions a film, nothing is better; it is the ultimate seal of approval. I look forward to audiences seeing this wildly entertaining and artistic film.”

Anita Hill Documentary To Get a Fall 2013 Release